Venice Film Festival has been serving us all kinds of fashion moments, from Zendaya in a Balmain work of art, to Timothee Chalamet’s black velvet suit.

And Last Night In Soho co-stars Matt Smith and Anya Taylor-Joy more than kept up with the Joneses at a screening of their new film.

Matt, 38, and Anya, 25, were among the best dressed at the festival as they celebrated Edgar Wright’s upcoming psychological horror at the film festival.

The Queen’s Gambit star paired the striking look with pink heels, a diamond necklace and loose waves in her blonde hair.

Meanwhile, Doctor Who star Matt embodied the retro vibes of the movie in high-waisted navy trousers, a matching jacket with black lapels and a baggy shirt with an open collar.

The stars sparked a flurry of romance rumours as they arrived to Venice together on a boat, with Matt putting an arm around his co-star’s shoulders and Anya brushing his hair back.

However, these two are just friends, as Anya has been pictured kissing her musician boyfriend Malcolm McRae, 27, on a break from festival duties.

Matt is believed to be single following his split from Lily James after five years together.

Matt and Anya star as lovers in Last Night In Soho, which director Edgar Wright describes as a homage to the ‘psychological thrillers I really adore’ from filmmakers like Michael Powell, Alfred Hitchcock, Mario Bava and Dario Argento.

Wright said at the festival: ‘I guess I wanted to find a way to sort of make a London version of that. I actually live around the corner from most of the locations in [Michael Powell’s] Peeping Tom. So it’s something that’s never far from my mind, because it’s something I literally walk past every day.’

Thomasin McKenzie plays aspiring fashion designer Eloise who finds herself transported back to the 1960s, where she embodies her idol of the era, Sandie (Taylor-Joy).

While in Sandie’s body, she falls for singer Jack (Smith), but things begin to fall apart in both the past and the present with horrifying consequences.

The horror, which has been receiving positive reviews out of Venice, marks the final film role of Dame Diana Rigg, who completed filming as Miss Collins before her death in September 2020.

Last Night In Soho is out in UK cinemas on October 29.


MORE : Marvel’s Simu Liu wins the internet as he trolls himself as well as those who doubted Shang-Chi at the same time


MORE : Strictly’s John Whaite has narrowed down who his professional partner will be 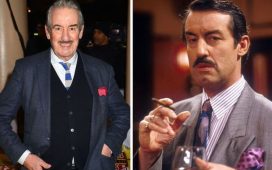