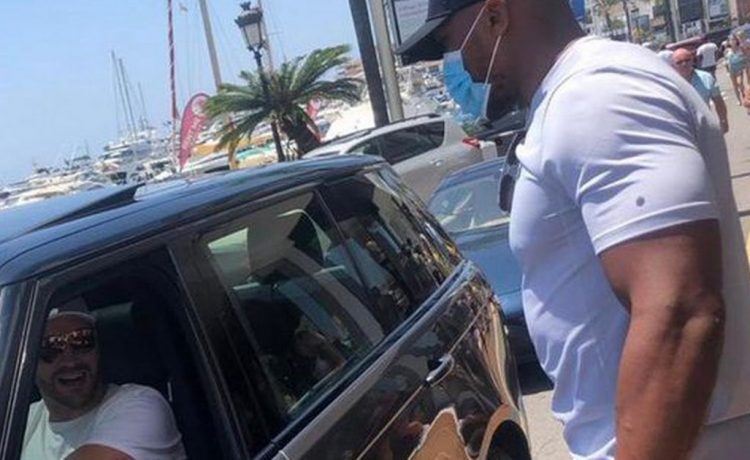 Anthony Joshua has teased fans over a potential fight with Tyson Fury after posting a picture of the pair up close and personal in Spain.

With the two Brits currently holding all of the world titles in the heavyweight division, with Joshua the current WBA, IBF and WBO champ and Fury winning the WBC in February, it seems almost inevitable they will meet in the ring.

And Joshua will have certainly added to that speculation with a post on his social media accounts on Saturday showing the pair in close proximity to each other.

The 2012 Olympic champion shared the snap of him looking into a car window where Fury was sat, caption it with “Sweeeeeeeeeeeet Caroline!! Ohhhh ohhh ohhhhh”.

The caption is a reference to the Neil Diamond classic ‘Sweet Caroline’, which AJ’s fans can often be heard singing after watching him win, while Fury himself has also been known to burst into a rendition of the song as part of his own celebrations.

The post is only likely to further whet the appetite of the British public who will be keen to see two of the country’s greatest ever fighters go toe-to-toe with all the heavyweight world titles on the line.

Both Brits, however, have fights to get through first before even beginning to think about any fight with their foe that could see them crowned the undisputed king of one of boxing’s most glamourous divisions.

Fury is contracted to a third fight with Deontay Wilder after stopping the American in the seventh round of their rematch in Las Vegas in February.

Joshua, meanwhile, is still set to defend his straps against Bulgarian rival Kubrat Pulev before the end of the year.

Both fights, however, have been affected by the coronavirus outbreak with dates not yet confirmed for either bout, meaning any potential clash between Fury and Joshua may not take place until 2021.