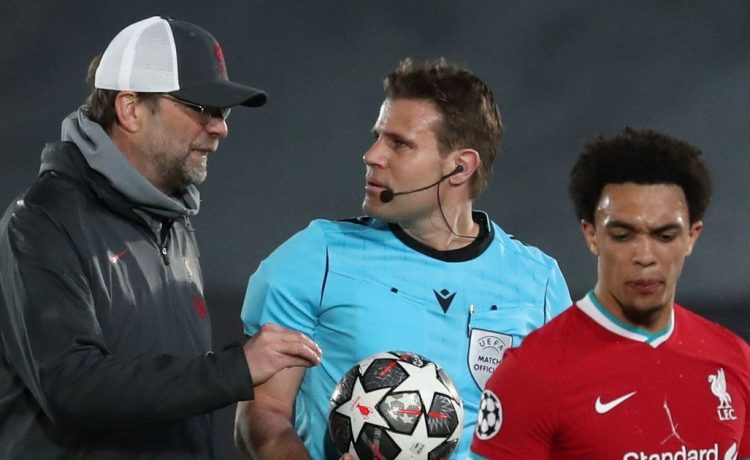 Jurgen Klopp admitted his side deserved nothing more than a Champions League beating in Madrid but still laid into referee Felix Brych.

The German official ignored an obvious foul against Sadio Mane ahead of Real Madrid ’s second goal and Klopp fumed: “I thought the referee was unfair on Sadio.

“For me, it was something personal. I didn’t understand what the referee did.

“Just an OK ref would have been enough. Whenever Sadio went down he didn’t get anything.”

Mane appeared to be shoved over by Lucas Vasquez less than 30 seconds before a Trent Alexander-Arnold howler allowed Marco Asensio to double Real Madrid’s lead after Vinicius Junior had scored the opener.

Mohamed Salah reduced the deficit but another effort from Vinicius Junior, which Alisson should have kept out, restored Real’s two-goal advantage.

And Klopp was not using his complaints about Brych as an excuse for a poor display against the Spanish champions.

He admitted: “If you want to go to the semi-finals, you have to earn the right to do so and we didn’t do that, especially in the first-half.

“The only good thing really I can say – apart from we scored a goal -is it’s only the first-half.

“We just didn’t play good enough football tonight to cause Real Madrid more problems. We made it too easy for them.

“We didn’t deserve a lot more tonight, but that one goal in the second half was OK and it least gives us a kind of a lifeline.”

Liverpool, of course, famously overturned a 3-0 first leg defeat against Barcelona in 2019 but, unlike then, there will be no fans at Anfield next Wednesday.

Klopp said: “It will be different but I can promise you we will give it a proper try.

“And it must be a really tricky task for Real Madrid, with or without supporters at Anfield.”