Andreas Pereira is a good squad player but shouldn’t be a regular first-team starter at Manchester United, according to Owen Hargreaves.

Pereira has featured heavily for the Red Devils this season, making his 35th appearance in all competitions in Thursday night’s Europa League draw with Club Brugge.

The Brazilian is favoured by Ole Gunnar Solskjaer because he can be deployed in different roles, but Hargreaves believes this is exactly why he should be considered a squad player rather than a first-team regular for United.

“He’s had the second most appearances for Manchester United this season,” Hargreaves said on BT Sport.

“He shouldn’t be in the position he’s in right now because Manchester United really in the past have always had players, you think of Paul Scholes and Roy Keane.

“Right now the load is being put on these young guys and [Marcus] Rashford and [Anthony] Martial and Mason Greenwood and Pereira.

“He’s played multiple positions this season. He spoke about goals there [in his interview] but I think he’s only got one [this season].

“So I think he’s done well, he’s had a breakthrough season but to expect him to get 15 goals, that’s unrealistic right now.”

Coronavirus: Hamilton self isolates after meeting Idris Elba but turns down test 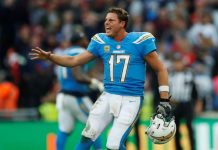 QB Rivers back in familiar ground with Colts