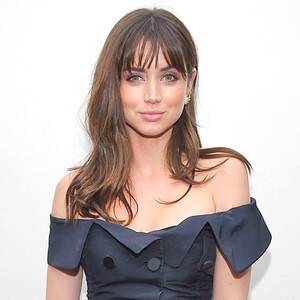 Ana de Armas is literally the spitting image of the late Marilyn Monroe.

The Spanish actress is set to play the blonde bombshell in the new Netflix biopic Blonde. Admittedly, this casting decision was put into question considering Ana is a brunette, but, clearly, there’s nothing a good box of dye can’t fix. Plus, Marilyn herself wasn’t even a natural blonde!

In new photos of the actress on the Blonde set, the star stepped out in a full Marilyn ensemble, complete with hair and makeup, and people were honestly shocked by the similarities. It was like the late actress was brought back to life! The hair and makeup department nailed every aspect of Monroe’s look, from the red lipstick to the perfectly coiffed hair. It helps that the 31-year-old exuded the sensuality and appeal of the iconic Marilyn Monroe.

And kudos also go to the costume department for finding the perfect little black dress and a string of pearls.

de Armas is joined by costars Bobby Cannavaleand Adrien Brody, both of whom will play her lovers, according to The Hollywood Reporter. The former is set to don the Yankees jersey as the famous Joe DiMaggio, while Brody is stepping into the character of Arthur Miller, Marilyn’s husband of nine months.

Like films that came before it, Blonde will delve into the life of the Hollywood starlet, as well as the relationships that captivated the press.

READ  How to wear men’s cardigans | Priya Elan
Share on FacebookShare on TwitterShare on PinterestShare on Reddit
newsgrooveAugust 30, 2019