TOTTENHAM manager Antonio Conte has been branded ‘an inspiration’ for getting stuck in during a training session.

The energetic Italian could be seen sliding in for the ball in a training exercise.

Conte, of course, timed his challenge to perfection and was replaced by one of his stars in the middle of the circle.

And whilst Tottenham fans have been left in awe by Conte’s commitment, it has left Manchester United fans feeling envious.

Whilst another joked saying the Italian is a better defender than club captain Harry Maguire.

They said: “Better defender than Maguire.”

Another footy fan said he isn’t surprised to see Conte getting stuck in during training sessions.

The United fan said: “People forget just how good he was as a player and the successful career he had.”

IS your downtime as epic as it could be?

You can get 50 free spins at PokerStars Casino. Boom.

Conte gives it his all everywhere he manages, and one Liverpool fan suspects the players are already buying into the Italian’s plan.

They replied: “Great dedication of Antonio Conte. Players already inspired by his presence.”

Tottenham are yet to be beaten under Conte, winning their Europa League Conference game 3-2 against Vitesse, drawing away at Everton and beating Leeds at home.

And you’d expect the good form to continue until at least mid-December when Spurs travel to Anfield to face Jurgen Klopp’s title-chasing Reds. 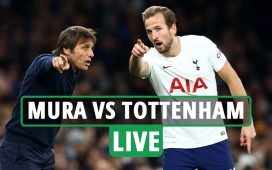