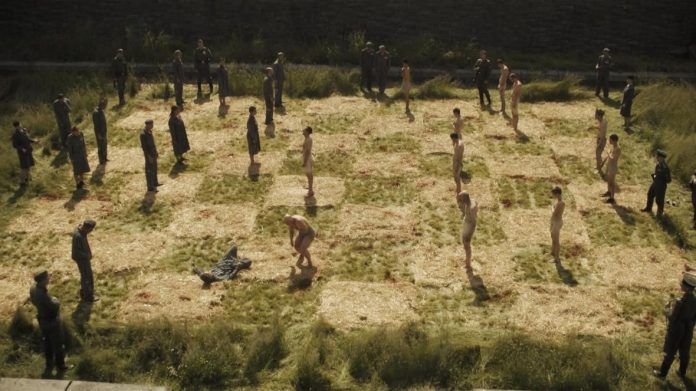 Amazon Prime’s new series Hunters has been accused of historical inaccuracies by the Auschwitz Memorial, over a scene in which prisoners were forced to play a game of ‘death chess’.

But one scene has been heavily criticised, appearing in the series’ first episode, in which a Jewish chess master held captive at Auschwitz is forced to play a game of chess on a mown chequerboard field with real prisoners being murdered.

The scene then features in the show’s opening credits.

There is no record of any such event having taken place, and now the memorial has branded it ‘dangerous foolishness and caricature’.

“Auschwitz was full of horrible pain & suffering documented in the accounts of survivors,” it said in a statement to Twitter.

“Inventing a fake game of human chess for @huntersonprime is not only dangerous foolishness & caricature. It also welcomes future deniers. We honor the victims by preserving factual accuracy.”

Auschwitz was full of horrible pain & suffering documented in the accounts of survivors. Inventing a fake game of human chess for @huntersonprime is not only dangerous foolishness & caricature. It also welcomes future deniers. We honor the victims by preserving factual accuracy. pic.twitter.com/UM2KYmA4cw

In replying to other tweets, it went on to describe the notion of fictionalising events of the holocaust as ‘disrespectful and dangerous’.

READ  Ken Loach: ‘The airwaves should be full of outrage’

Weil, a new writer whose grandmother was a survivor of the Nazi death camp, has defended his choice to invent the scene.

“While Hunters is a dramatic narrative series, with largely fictional characters, it is inspired by true events,” he said in a statement. “But it is not documentary. And it was never purported to be. In creating this series it was most important for me to consider what I believe to be the ultimate question and challenge of telling a story about the Holocaust: how do I do so without borrowing from a real person’s specific life or experience?

“In speaking to the ‘chess match’ scene specifically… this is a fictionalized event. Why did I feel this scene was important to script and place in series? To most powerfully counteract the revisionist narrative that whitewashes Nazi perpetration, by showcasing the most extreme – and representationally truthful – sadism and violence that the Nazis perpetrated against the Jews and other victims.

“And why did I feel the need to create a fictional event when there were so many real horrors that existed? After all, it is true that Nazis perpetrated widespread and extreme acts of sadism and torture – and even incidents of cruel ‘games – against their victims. I simply did not want to depict those specific, real acts of trauma.

“If the larger philosophical question is can we ever tell stories about the Holocaust that are not documentary, I believe we can and should.”

The show has come under some criticism for its tone and stylised violence.

The Guardian called it ‘dangerously insensitive‘, while the Daily Telegraph argued that ‘turning [the cruelty of the Nazis] into schlocky popcorn entertainment sets a very odd tone’.

Amazon has recently also come under fire for continuing to sell anti-Semitic books on its site, particularly The Jewish Question in the Classroom by Julius Streicher, a Nazi propagandist.

Movie streaming sites: What are the best streaming platforms to watch movies? Our picks

What Studio Ghibli films will be released on Netflix today, 1 April?