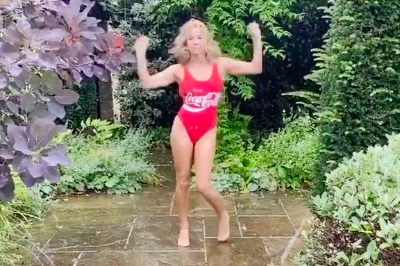 After what seemed to be an endless heatwave earlier this month, the UK has been battered by thunderstorms – but not everyone has been disheartened by the miserable weather.

Amanda Holden has seemingly enjoyed the wind and the rain, throwing herself (quite literally) into the eye of the storm and dancing in her back garden.

In true Mandy fashion, the 49-year-old unleashed her inner Pamela Anderson as she donned a skimpy red swimsuit to dance to Flashdance classic Maniac.

Holden has become somewhat of a TikTok legend, with the actress and presenter turning to the relatively new social media platform while the nation was in lockdown. Her posts have included getting her daughters to do her make-up, dancing alongside her dog, or just drinking rosé.

Speaking about her time on the platform, Holden told Huff Post: “I just like being silly. But I’m really glad you’ve taken it how it is meant, which is a bit of fun and laughter.

“I’ve howled with laughter filming it.”

We don’t have too long to wait until we see Holden back on television screens again, with the star set to return alongside David Walliams and Alesha Dixon for the Britain’s Got Talent semi-finals.

The shows, which are usually filmed live in May, were delayed due to the coronavirus pandemic, and are now thought to be airing in September.

Holden, who released a cover of Judy Garland’s Over the Rainbow to raise money for NHS Charities while in lockdown, is expected to be performing her single on the programme.

“My album is actually quite reflective, so I’ll probably have a bit of lighting and a bit of dry ice, and get my teeth whitened for the close up,” she previously told Standard Online.

“Simon [Cowell] has heard the whole album. It was nice for the biggest critic in my life sign off on it. So I thought, okay, I feel okay to release this!”