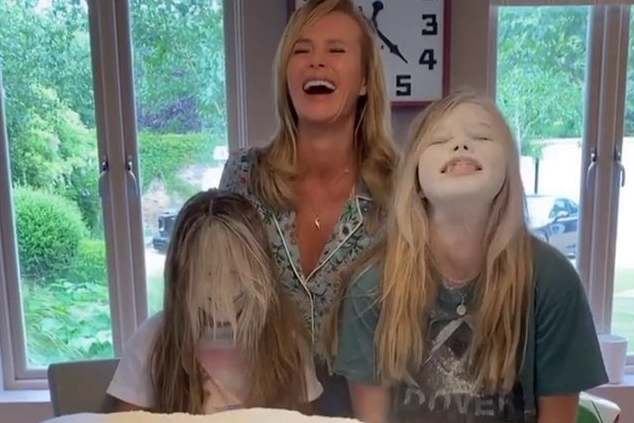 Amanda Holden’s latest foray into the world of TikTok saw the presenter dunk her daughters’ faces into piles of flour as she answered a series of questions about their personalities.

The Britain’s Got Talent judge, 49, was joined by daughters Lexi, 14, and Hollie, eight to take part in a new – and very messy – TikTok challenge.

The children stood in front of a pile of flour while Holden answered a series of questions about her daughters, ranging from ‘who has the messiest room?’ to ‘who gets away with the most?’.

Her daughters then each had their faces pushed into the flour if Holden thought that their personality best fitted the question.

She started off by refusing to choose “who is the favourite child,” instead dunking both Lexi and Hollie into the flour, leaving their faces and hair covered.

Holden and her daughters continued to collapse into giggles as the backing track continued with questions including ‘who treats mum and dad like a chauffeur?’ and ‘who is the most annoying?’.

The star suggested that her eldest daughter “asks mum and dad for more money” while Hollie is “more likely to move back in with mum and dad after college.”

She also revealed that Hollie is “more musically inclined” but Lexi “has better taste in music.”

Sharing the video on Instagram, Holden admitted that the challenge had caused chaos in her kitchen, writing: “Omg. The clear up after this!”

She added: “Our gorg [sic] girls. Who do you think came out best?”

Holden joined TikTok at the start of the lockdown and has regularly recruited her two children to take part in challenges on the platform.

Her husband Chris Hughes previously joined the trio for a sweet TikTok video in which they recreated an old family photo dating back to when Hollie was a baby.