Amanda Bynesis living in a state of post-engagement bliss and it’s all thanks to one guy.

On Valentine’s Day, the former child star revealed she’s now engaged to the “love of my life” in what was definitely one of the most shocking announcements of the evening. She shared the news alongside a photo of her silver ring and his gold band, although she made an effort to conceal his face at first.

Then, after much pleading from her many followers, the Easy A star revealed the man who she wants to spend the rest of her life with: Paul Michael. At the time, a source confirmed to E! News that Amanda had met Paul Michael in rehab and they’d been dating for about two or three months. And, despite the short courtship, the insider confirmed the engagement is definitely real.

Now, with the news out, the star is freely and happily sharing photos of herself and her future hubby.

In the latest pictures shared by Amanda, her fiance’s face is clean-shaven and he’s ditched the glasses to achieve a more suave look. She captioned the moment, “Myloveispaul.”

Plus, the 33-year-old has revealed that she still plans to create a fashion line, which she hopes will be released online in the near future.

It seems the star’s doing well after a slight hiccup in December, when a source confirmed she’d left her sober living facility and dropped out of her bachelor’s degree program. As a source said at the time, “She may not go back [to the facility], but again, she’s not doing drugs and mentally and physically she’s okay.”

Stay pop cultured with E! News Tuesday – Saturday at 7am in the UK only on E! 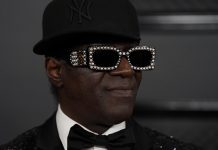 Lizzo Thanks Healthcare Workers With Lunch on Her Amid Coronavrius Pandemic