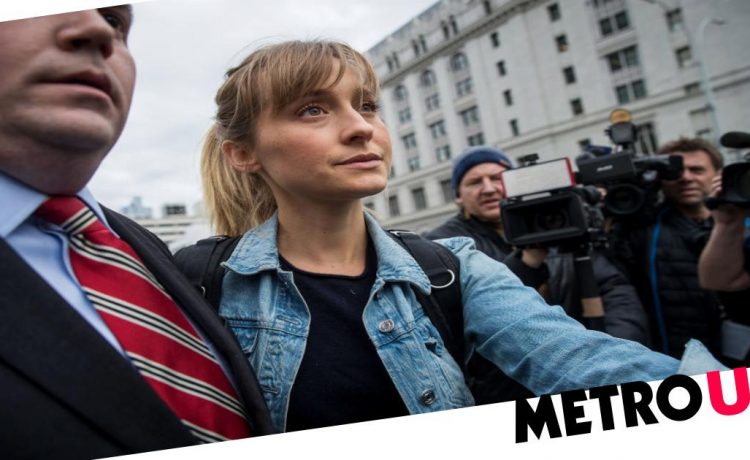 Former Smallville star Allison Mack turned over a recording of NXIVM cult leader Keith Raniere discussing a branding ritual to federal prosecutors, it has been reported.

Mack, 38, faces between 14 and 17 and a half years in prison after she pleaded guilty in April 2019 to racketeering and racketeering conspiracy charges that included extortion and forced labour relating to her role in NXIVM, a cult which claimed to be a multi-level marketing company and leadership program.

Prosecutors have asked Brooklyn federal judge Nicholas Garaufis to give Mack a reduced statement for assisting prosecutors by handing over the audio recording.

In a memo filed on Monday in a Brooklyn federal court, published by Variety, prosecutors said: ‘Although Mack could have provided even more substantial assistance had she made the decision to cooperate earlier, Mack provided significant, detailed and highly corroborated information which assisted the government in its prosecution.’

Raniere, who founded NXIVM, was convicted last year and was sentenced to 120 years in prison.

In 2017, it was first reported that women who joined DOS, a secret society within NXIVM, were groomed to be Raniere’s slaves and were branded with his initials with a cauterising pen.

According to the memo, Raniere is heard saying on the recording: ‘Do you think the person who’s being branded should be completely nude and sort of held to the table like a, sort of almost like a sacrifice?

‘And the person should ask to be branded. Should say, please brand me it would be an honour, or something like that. An honour I want to wear for the rest of my life, I don’t know… And they should probably say that before they’re held down, so it doesn’t seem like they are being coerced.’

The tape was played during Raniere’s trial.

Mack also reportedly told the government about how Raniere would ask for nude pictures from women she had recruited into the group, and gave information about crimes committed by others in the group.

Prosecutors added that Mack was a ‘master’ who recruited several women into the cult and encouraged them to have sex with and provide naked pictures to Raniere.

Mack’s lawyers will file their own sentencing memo this week.

The FBI arrested Mack in Brooklyn in April 2018, on charges of sex trafficking, sex trafficking conspiracy and forced labour conspiracy, with the actress pleading guilty to racketeering charges a year later.

She will be sentenced on June 30.

Prior to her arrest, Mack was best known for playing Chloe Sullivan on the series Smallville, as well as roles in Wilfred and the film Honey, We Shrunk Ourselves.


MORE : This Morning’s Phillip Schofield fumes over England footballers isolating at Euro 2020 in heated debate: ‘Shut the fun down’