NewsGroove Uk
NewsGroove Uk > Health > All over-50s will have Covid vaccine by March thanks to UK’s head start on jabs roll out, says AstraZeneca boss
Health 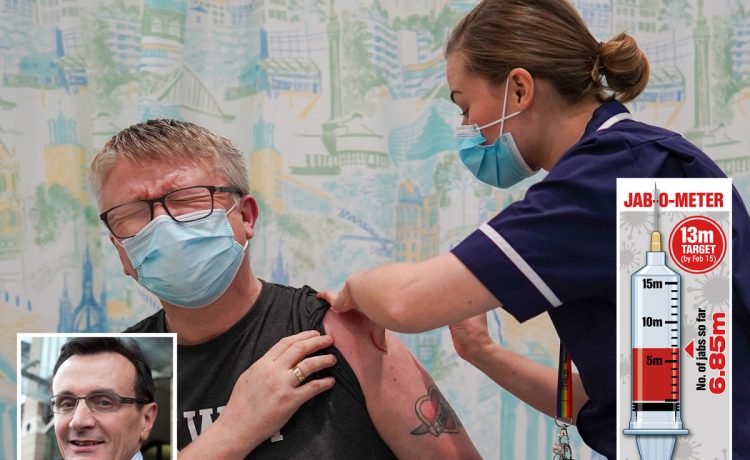 THE UK is on track to have all over-50s vaccinated within weeks thanks to its swift roll-out.

Pascal Soriot, boss of vaccine manufacturer AstraZeneca, said he believed the UK was on course to administer doses to “maybe 28 or 30 million people” by March – which is half the population.

“By March, the UK will have vaccinated maybe 28 or 30 million people,” he said in an interview with Italian newspaper La Repubblica.

The aim of the vaccine delivery plan is to give the first dose to all 32 million people in the UK’s nine priority groups.

This includes everyone over 50 years old, plus millions of people over the age of 16 who are clinically vulnerable and healthcare workers.

Therefore, Mr Soriot’s predictions suggest all over 50s in the UK could get their first dose by March.

Mr Soriot also said its likely all the four priority groups – those over 70, healthcare workers and the most clinically vulnerable – will be jabbed by mid-February.

So far 6.8 million people have been given their first dose of either the Oxford vaccine, made by AstraZeneca, or the Pfizer vaccine.

If the vaccination rate of 2.5 million jabs per week stays on track, the 13.5 million target will be reached by February 15.

READ  Up to 56,000 could already be infected with coronavirus in London WITHOUT knowing – yet still people ignore the advice

One in eight adults have now had their first dose, Sir Simon Stevens, the chief executive of NHS England, has said.

He told the Downing Street briefing “we are well on our way” in the huge vaccine deployment drive.

It comes amid rising tensions over the distribution of life-saving vaccines across Europe.

EU chiefs are threatening to block drug exports to the UK after criticism of its slow roll-out.

European health commissioner Stella Kyriakides accused AstraZeneca of failing to give a valid explanation for why it had to delay shipment of around 15 million doses.

EU politicians accused the firm of withholding the bloc’s “fair share” of vaccines – which EU regulators have not given approval for yet.

Warning that the EU “will take any action required to protect its citizens and rights”, Ms Kyriakides said an “export transparency mechanism” will be installed “as soon as possible”.

Mr Soriot rejected the suggestion the firm was selling to the highest bidder “because we make no profit everywhere” under the agreement signed with Oxford University.

He added that the deal with Britain was signed three months ahead of the EU’s.

Yesterday vaccines minister Nadhim Zahawi said he was confident that the UK will continue to receive its deliveries of the Pfizer/BioNTech jab, which is manufactured in Europe, despite the EU’s threats.

Asked whether the EU could prevent Pfizer vials from leaving its borders, Mr Zahawi told Sky News: “No, I’m confident that the Pfizer vaccine will be delivered.

“Pfizer have made sure that they have always delivered for us, they will continue to do so.”

Prime Minister Boris Johnson has said he has “total confidence” in the UK’s supply of vaccines following the row, ahead of unveiling his road map out of lockdown by mid-February.

What are the symptoms of new Covid strains? The 6 signs to watch for

He told a Downing Street press briefing that the delivery of vaccines was a “multinational effort” and the UK would continue to work with European partners.

Mr Johnson said: “All I would say is obviously we expect and hope that our EU friends will honour all contracts.

Ministers have admitted that supplies of vaccines are “tight”, which is why the decision was made to double the number of people could receive one dose, rather than two doses.