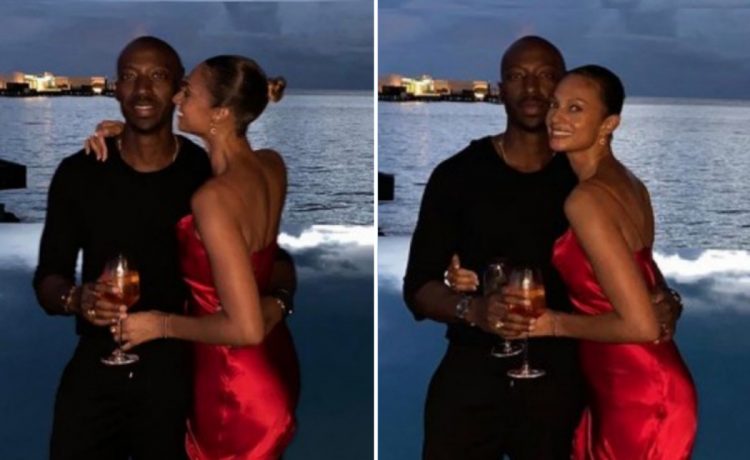 ALESHA Dixon looks incredible in a slinky red silk dress as she pays tribute to husband Azuka, calling him the “love of my life.”

Taken in front of a blissful skyline, the Britain’s Got Talent judge and her beau of three years, looked completely loved up as they snuggled into one another.

Showing off her lithe figure in the figure-hugging dress, Alesha, 42, beamed with happiness for the gushing tribute post.

Azuka looked equally gorgeous for the photo in an all-black outfit and simple jewellery.

The happy couple appeared to be sharing a joke as Alesha burst into laughter before they go in for a smooch.

Sharing the images to her Instagram, the mum-of-two wrote: “We laugh, I cry 😉, we debate, we parent, we play! Love of my life”

Underneath the beautiful photos Alesha’s fans rushed to heap praise on the couple.

While a third penned: “I love this! You look so happy and beautiful.”

Alesha and Azuka Ononye, 40, are believed to have started dating in 2012 and secretly married in 2017.

The Strictly star previously said on The Jonathan Ross Show that she was “kind of playing hard to get for about a year”.

She added: “Then I had the foot operation and I couldn’t walk and he was literally sleeping on the floor looking after me every day. I was just looking at him thinking, ‘That is for better or for worse isn’t it?’ I looked a state, he was sleeping on the floor because I was on the couch, I couldn’t even get up the stairs. If he can carry me to the toilet then he’s a keeper.”

Dancing fans are delighted that Alesha is set to return to the BBC’s Strictly Come Dancing for the Christmas special.

The star quit her role on the judging panel for the BBC One Latin and ballroom show nine years ago to be a judge on Britain’s Got Talent.

Alesha, 42, is commentating the 75-minute Strictly highlights episode along with show presenters Tess Daly and Claudia Winkleman, the judges and professional dancers.

Speaking about how the show transformed her life, she said: “Winning ‘Strictly Come Dancing’ changed my life.

“It came into my life at a time where I needed a lift, I needed something positive. And it really was the tonic that I needed.

“For about five years ‘Strictly Come Dancing’ was a huge part of my life. It was just a wonderful experience that I will hold dear to me for the rest of my life.”

The special was filmed before Bill Bailey won this years’ series with his dance partner Oti Mabuse.

Meanwhile, fans of Alesha will get a double dose of the star on Christmas Day as she’s set to perform a rendition of Have Yourself a Merry Little Christmas on the Britain’s Got Talent’s festive special with pianist Tokio Myers, who triumphed on the talent show in 2017.

Her fellow judge David Walliams is set to do an impression of the Queen, which he said is likely to upset Buckingham Palace.

He will do a version of her festive speech.

It is David’s contribution to the ITV show as all four judges get on stage to perform themselves.

He said: “So that was fun — it’s an alternative Queen’s Speech.

“In any case, the Queen is going to watch it and not be very happy.”

His comedy mash-up, which includes comics Daliso and Lost Voice Guy, does, however, get the seal of approval from fellow judge Amanda Holden, who performs her single Home For Christmas with 2014 champions Collabro.

She said: “He does a very funny speech. It’s kind of believable.”