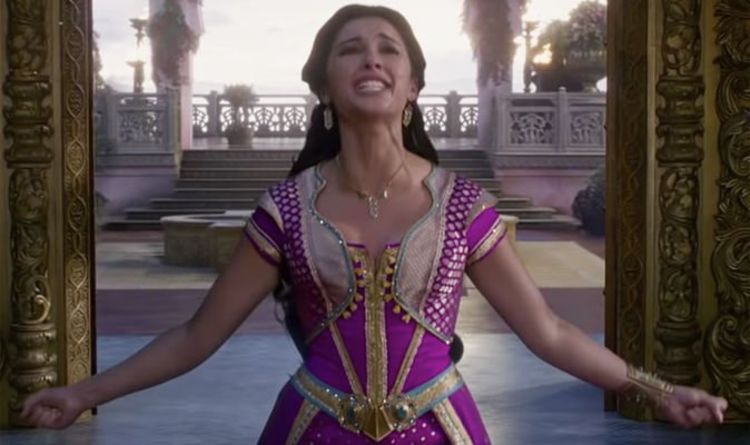 There are moments in the film, especially towards the beginning of Princess Jasmine’s new showtune Speechless, when it sounds very much like the actors are singing live on set. So are they? Speaking in a TV interview this week, Naomi Scott – who plays Jasmine – revealed how the vocals were captured. Were they recorded in advance, or sung live on set?

The answer, surprisingly, is both.

Parts, like that opening segment of Speechless, were sung live on set.

Speaking to Jimmy Kimmell on his US chat show, Scott said: “I was [singing] for a lot of it, yeah.

“We had the amazing Simon Hayes, who won the Oscar for Les Mis.”

Indeed, the recent live-action Les Miserables movie was noted at the time for the fact that the actors sang their songs live on set.

Scott added: “So I was like, what a great opportunity to sing live, and he was all about it.

“So the first speech is all live, and then you have a little earpiece [to hear the backing track].

“So I’m just singing acapella on my own like a crazy person on set.

“And the worst part is you can’t really hear for yourself. I wouldn’t want to know what they [crew] were hearing.”

Speechless is already resonating with fans, and has impacted the UK iTunes chart after one day of release. It is No48 at time of writing.

Aladdin has suffered from poor reviews from critics, and currently falls just below the 60% threshold to be rated “Fresh” by the site – it is on 59%.

The consensus reads: “Aladdin retells its classic source material’s story with sufficient spectacle and skill, even if it never approaches the dazzling splendor of the animated original.”

Aladdin is out now.