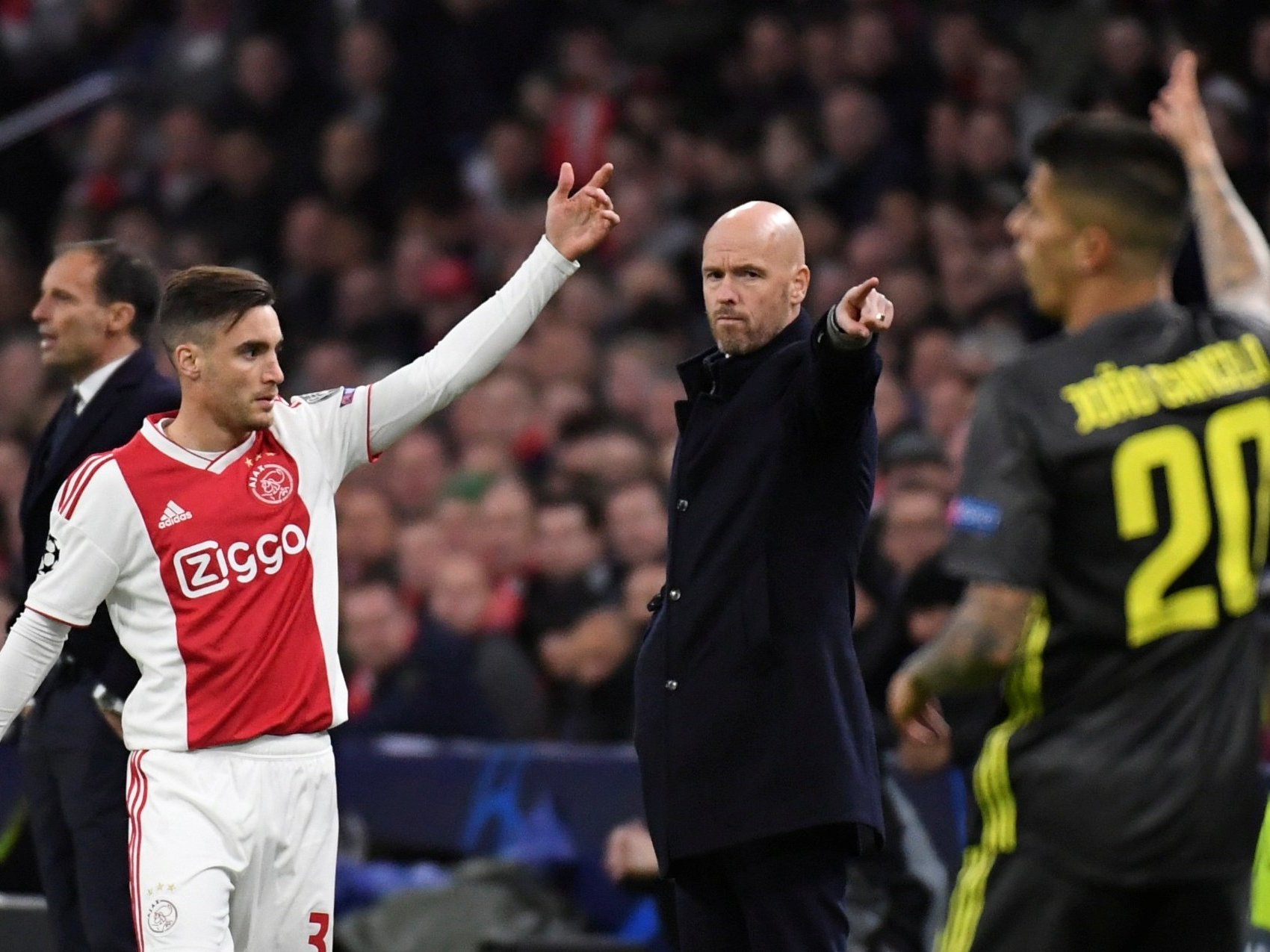 Follow the latest updates live from the Champions League quarter-final first leg between Ajax and Juventus at the Johan Cruyff Arena in Amsterdam.

All eyes will be on Cristiano Ronaldo as the Juventus forward looks to start his first match for his club since mid-March, having recovered from a thigh injury to feature in the last-eight encounter. However, Massimiliano Allegri will be unable to call on defender Giorgio Chiellini and Emre Can who miss out through injury.

Ajax meanwhile are looking to achieve something that they have not achieved since 1997 in reaching the semi-finals, but after knocking out reigning champions Real Madrid in the last-16, Erik ten Hag’s side will be full of confidence against the Italian side. Follow the live action below.


85 min: Juve hit the post! They almost stole another one. Costa, who’s provided far greater a threat in such an open game, barrels down the left wing with nobodyable to close him down and drills a shot across the face of goal. It hits the woodwork but somehow bounces out! And breathe.


82 mins: Ajax comes so close again! And it’s Ziyech, still causing turmoil to the Juve defence, who combines with Tadic to set up Ekkelenkamp, but the teenager doesn’t strike the shot with conviction and Szczesny makes another great save.


78 min: Douglas Costa makes his introduction felt for the first time, shimmying his way beyond De Jong and charging towards the byline. He can’t direct his cross through which drifts with all the potency of a ballon into Onana’s palms.


74 min: Matuidi is replaced by Dybala as Juve continue to attempt to reignite their attacking threat.


72 min: Schone picks up a yellow foul for a crude tackle on Bernardeschi and is swiftly replaced by Ekkelenkamp – another 19-year-old star to be. You could never accuse Ajax of shying away from their honoured approach.


69 min: Juventus almost spring into another lethal counter-attack, much in the image of the first half. This time Ajax are able to clear but that is the danger they have to stay wary of while enjoying such dominance over possession.

De Ligt throws his weight into a tackle with Ronaldo and leaves a little bit on him for the road. The Johan Cruyff Arena coo in delight. That’s a captain.


63 min: It’s Ziyech again causing all sorts of strife for Juventus’ defence. First, he cuts in off the right, wriggles room for a shoot and attempts an audacious slice off the outside of his boot, which drifts harmlessly out.

A couple of minutes later and he works room for another shot on the edge of the area, but it’s blocked so he tees up Veltman who forces a comfortable save from Szczesny.


60 min: It’s a change of approach from Juventus, who replace Mandzukic with Costa in a bid to add some dynamism to their front three and pose a greater threat on the counter attack.


55 min: A cynical and, if it can be said about a player of such brilliance, stupid foul by de Jong who gets a yellow card for hauling Cancelo to the floor.


53 min: Neres bustles the net again from a similar position, but is ruled offside.

Then, just moments later, it’s Juve who comes the slightest of margins from securing victory. Bernadeschi’s free-kick is whipped across the face of goal, which somehow nobody can see to get a toe to. The Juve players hound the referee, claiming Bentacur was pulled back by Tagliafico but VAR says no.


48 min: The goal has totally rocked Juve who are split open again seconds later with van der Beek finding Tagliafico rampaging down the left and thrashing a Podolski-esque left footed drive that wilts the side-netting.

Wow! What a start from Ajax. Juve fumble a routine long ball and Neres cuts inside and whips an effort into the far corner with little more than 30 seconds of the second-half played. Game on!

There was a sense of the inevitability about that goal. Ajax had thrown everything at Juventus all half, dominated the vast majority of it and had a usually stable defence reeling. But after failing to convert those chances, they’ve left too many men forward on the stroke of half-time and Ronaldo breaks free in the area, Cancelo’s ball is inch-perfect and a typically powerful neck-straining header from the Portuguese talisman breaks the deadlock.

READ  Everton were a mess - a defensive shambles, overran in midfield and toothless in attack


41 min: Neres is fouled on the edge of the box by Bentacur but as the referee waits to see if there’s any advantage, Tagliafico leaves a nasty and late slide tackle on Cancelo. The referee gives the free-kick, but the Argentinian also receives a yellow card for his dirty work, which will keep him out of the second leg.


37 min: And Juventus come so close to retaliating straight away. Matuidi’s cross is met by Ronaldo who nods it down to Bernardeschi. The winger flashes a shot just wide of the post and appeals for a corner, but the referee didn’t spot the slight deflection.


34 min: Ziyech, who is proving impossible to track, comes just inches from setting-up the unmarked Tagliafico at the back post with a great through-ball, but the left-back can’t quite meet it with an outstretched toe.

What time is kick-off and how can I watch it?

The game kicks off at 8pm BST at the Johan Cruyff Arena in Amsterdam.

The match will be shown live on BT Sport 3 from 7.30pm. For those without access to a TV it can also be live streamed online via the BT Sport website.