Aisling Bea jokes she’s ‘absolutely’ too young to play a mum in Home Sweet Home Alone at 37: ‘I was half honoured, half insulted’

I suppose I can answer them both in one go — while I do like to eat a sausage, I like to keep it vegetarian.

You’re about to become a massive part of everyone’s Christmas with the Home Alone remake.

Yeah, so I’m sorry/you’re welcome! Delete as appropriate. When I got this job at the end of 2019, it was for Disney+, which has now exploded into this huge platform so it suddenly feels like a big ol’ deal.

Did you think you’re too young to play the mum?

Absolutely. I was half honoured, half absolutely insulted. I auditioned to be [the new Macaulay Culkin part]. I sent a million tapes in but it just didn’t work out.

Next stop, the Marvel Universe?

You asked that question the same way my mother does. She’s like, ‘When would you do a Star Wars movie, Aisling?’ And I’m like, ‘Yeah, Mummy, because that’s how it works.’ I keep on emailing Marvel, saying, ‘Lads, call me,’ but they’ve yet to put me in the universe.

As a child, what did you watch on telly at Christmas?

It’s based on The Late Late Show, which is one of our biggest chat shows, and every Christmas they do the Toy Show, where children come on and test the toys, and every year you send in your letter, hoping that you might be one of those kids chosen.

And I do love The Muppet Christmas Carol. The Muppets are some of my favourite comedians. I basically got into comedy because of The Muppets. I would love to be in a Muppets movie!

What sort of child were you?

I was kind of like this personality now but just with a small child’s head. So probably bordering between being actually entertaining and extraordinarily annoying.

What would you like to unwrap on Christmas morning?

The cheesy answer is that I’ve got family flying in from India and my mother flying in from Ireland. Last year, there was a Covid outbreak at the job I was in so I spent Christmas alone while my mother was up the road and I didn’t get to see her.

So the idea that this year everyone’s coming in vaccinated and we’ll get to be around the kids, that’s a novelty rather than the traditional chore and something I’d pay huge amounts of money for.

Will there be another series of This Way Up?

Series two was a really tough thing to make during the pandemic because we shot that just after the cancelled Christmas of last year so I’m honestly really proud of it.

I think, with the first series, I had a bit of a sense of, ‘Hurry up and watch it! I spent so long making it!’ and with the second series, if you’ll forgive me another handful of parmesan, I know the people I wrote it for, and if and when they find it, they find it.

What TV show would you like to appear on?

I’d love to be in the French show, Call My Agent. I’m fairly obsessed with that. This Way Up did really well in France — they love a bit of feminism over there.

Or I would love to come into Succession playing a real piece of s*** — because what other characters are there?

Are you a workaholic?

Yes, yes, yes. It panics me to stop so I don’t. That’s one thing I would like to work out for my New Year’s resolution — that it’s OK to stop.

Because when you’re a workaholic you do work that isn’t actually work or important just to feel like you’re working, which is actually a really bad way to work.

How will you fill the gap? Learn to crochet?

My worry is that I’d then start writing a TV show about crochet!

I got one wall wallpapered in magnetic whiteboard. Dara Ó Briain had it in his house and I was jealous. So you have a whole wall you can write on/wash off/stick magnets all over. It’s reeeeeally satisfying.

If you were a biscuit, what biscuit would you be?

There’s an absolutely filthy answer I could give but you can’t really put it in Metro. So I’ll just say a chocolate digestive, which you have to lick to get the top off.

Have you ever kept any New Year’s resolutions?

I don’t think so but I’m a big list maker and every year I do witch ceremonies — I write down the good things and the bad, and I burn stuff. The neighbours are always like, ‘Oh, there’s another fire next door — something bad must’ve happened to Aisling.’ The sage, the cleansing — I’m always looking for some kind of magical change.


MORE : Aisling Bea responds to fans freaking out about her English accent in new Home Alone film in the most Aisling Bea way possible 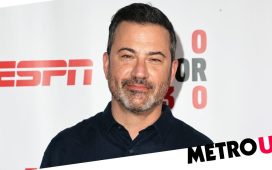