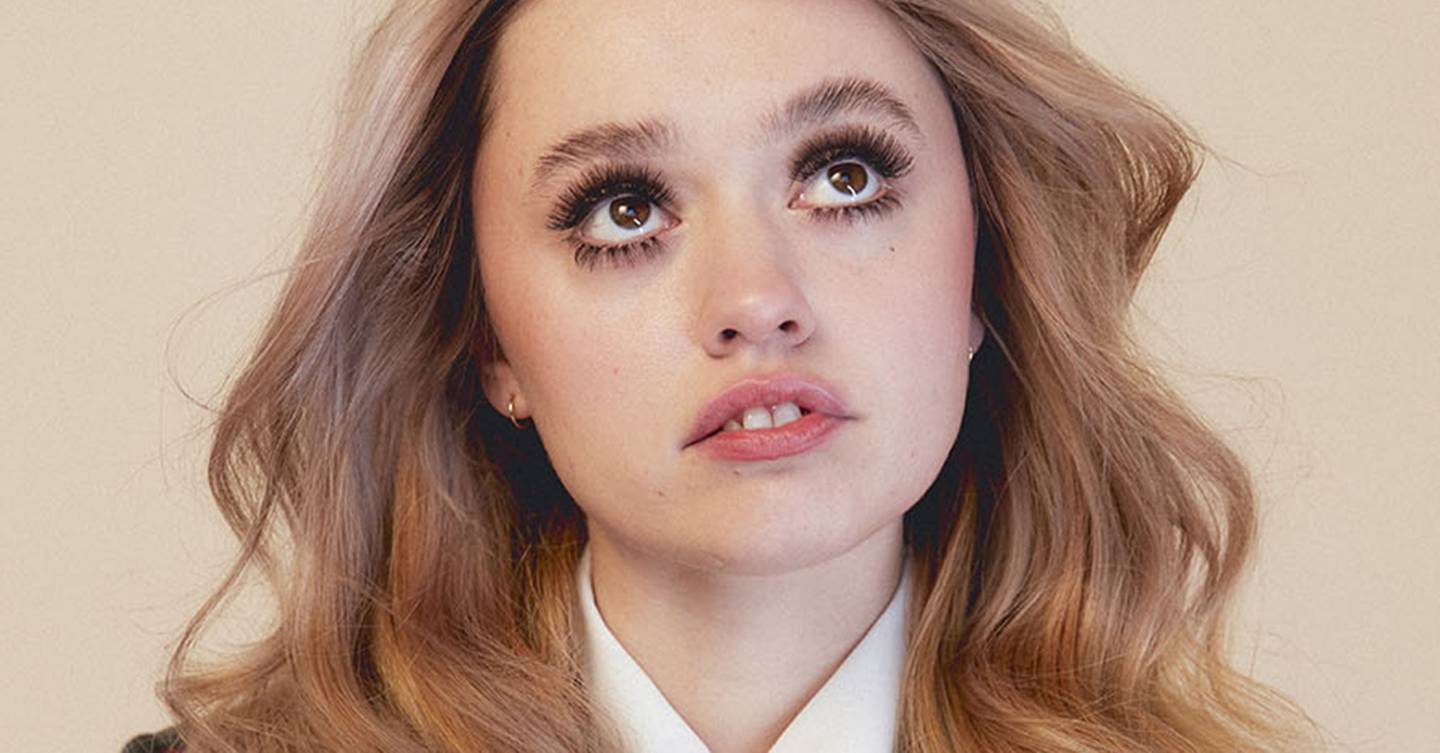 Aimee Lou Wood is one of the most fearless – and likeable – actresses of her generation. Her star turn in Sex Education cemented her as a new screen kween and her no f**** given attitude to portraying sex on TV had us from her opening scene (yes, full-on sex).

What we love most about Aimee is how candid she is when it comes to sharing her experiences of eating disorders and body dysmorphia, and how she hopes to empower women everywhere by shattering taboos around female sexuality.

As we gear up for Sex Education season three dropping, Aimee has spoken frankly about her experiences with eating disorders and how her relationship with her body image changed after filming the sex scenes in Sex Education, playing Aimee Gibbs.

Speaking on Make It Reign, the brilliant new podcast hosted by journalist and presenter, Josh Smith, Aimee opens up about filming THAT solo sex scene and discusses how it initially left her with “vulnerability hangover” but looking back now she is so proud the scenes portrayed female pleasure in a realistic, non-airbrushed way.

‘I used to write “fat” on my mirror’: Sex Education’s Aimee Lou Wood opens up about her body dysmorphia


“Now I look back, I go, “Wow, that was great.” At the time that it happened, I was absolutely cacking my pants. I did the masturbationscene. Then the intimacy coordinator, Ita, said, “Sometimes you’ll feel pretty exhilarated after you’ve just done the sex scene, and then a day later or two days later you get a bit of a vulnerability hangover and you’re like, ‘Shit!'” So she checks in on us either a day or two days after we’ve filmed it to see how we’re feeling.

“On that one, I was absolutely fine after the first sex scene, and I was fine with all of the other stuff, and then on that one… She said that masturbation ones can be a lot harder because it’s you by yourself, you don’t have another actor to bounce off, I mean, literally bounce off. So you don’t have that person there to joke with and give reassurance to. It’s just you, and it’s quite intense… A couple of days later I was like, “Oh my god!” So many worries were ignited – you try and separate yourself from the character as much as possible in those scenes, so you don’t feel like you’re watching yourself wank like you do in your bloody bedroom because that is not what you want millions of people to see.”

Aimee on how Sex Education inspire her to go to therapy

“I have changed immensely since doing Sex Education. I always put it down to therapy as to why I’m so much more vulnerable and honest with my feelings. But actually, I think the only reason why I even started going to therapy in the first place was because of Sex Education, because I saw how much therapy enhanced people’s lives in that show, and how much people needed it. It really did just open something up in me that was definitely slammed shut.”

Aimee on the troubles of therapy and triggering material

“I think therapy can also be a bit of a weird thing, because it’s amazing, and I think it’s so vital, and it’s helped me in so many ways, but it also does uncover things that you probably would never usually because it’s like a bloody excavation. It’s like unrooting everything. And (at the moment) I’m going, “Why did I ever start this? I could have carried on living in blissful ignorance.” I’m in quite a difficult stage of it right now, because it’s properly getting to the good stuff. I think that as long as I just keep going there and keep being brave in that way, by the end I’ll get there.

READ  These are Lush's 6 best-selling products (and they're all under £18!)

“It’s like when I get a book, I’ll buy a book, I’ll think, “Oh, that book will really help me.” Something like, The Imp of the Mind, about OCD, or Mad Girl by Bryony Gordon. And I’ll start reading them and it’ll start to trigger me, of course. If you’re relating to it, it’s going to be triggering or stirring in some way. I’ll stop bloody reading them, because I’ll go, “Oh my god, this is too scary and too real.” Actually even then I have to go, “No, force yourself to read it, because you’ll get to the bit where she’s okay. You’ll get to the bit where Bryony’s like, ‘Yeah, all this shit stuff did happen, but now I’m happy, and now I’m the best I’ve ever been.'” I think for me, it’s just really about hanging in there with all that self exploration stuff, and not just taking the exit route, go and get it done.”

“I get messages from girls saying it’s helped them so much, me talking about my eating disorders and I never had that. I would google ‘actresses with eating disorders’ and nothing would come up. I also get so many messages even about my teeth with girls saying, ‘Oh my god, I have teeth like yours. I was going to get braces, and now I’m not anymore.’ I used to search that frantically, ‘actresses with overbites,’ ‘actresses with gap teeth.’ Thinking, because I don’t see them anywhere, am I really going to pursue a career in acting before I get a bloody Invisalign?”

“The day in the detention scene when all the girls talked it was literally art imitating life. We were all having that kind of group therapy session when the cameras weren’t rolling, and then when the cameras were rolling – it was just this incredible parallel – it was overwhelming, but a good way, and very cathartic. When it got to the scene where they were all waiting for me to get on the bus, I mean, we were all seriously in tatters.”

It’s the news we’ve been waiting for since devouring the second season of Sex Education in one weekend: it’s coming back for season three. Hurrah!

The hit teen drama, which garnered over 40 million viewers after its debut in 2019, has enjoyed enormous success worldwide due to its honest, eye-opening and inclusive portrayal of sex and sexuality. Find out all the details in our ultimate season 3 guide.