NewsGroove Uk
NewsGroove Uk > Politics > After telling Brits not to vote for Jeremy Corbyn, is Tony Blair the most sensible man in Britain?
Politics

After telling Brits not to vote for Jeremy Corbyn, is Tony Blair the most sensible man in Britain? 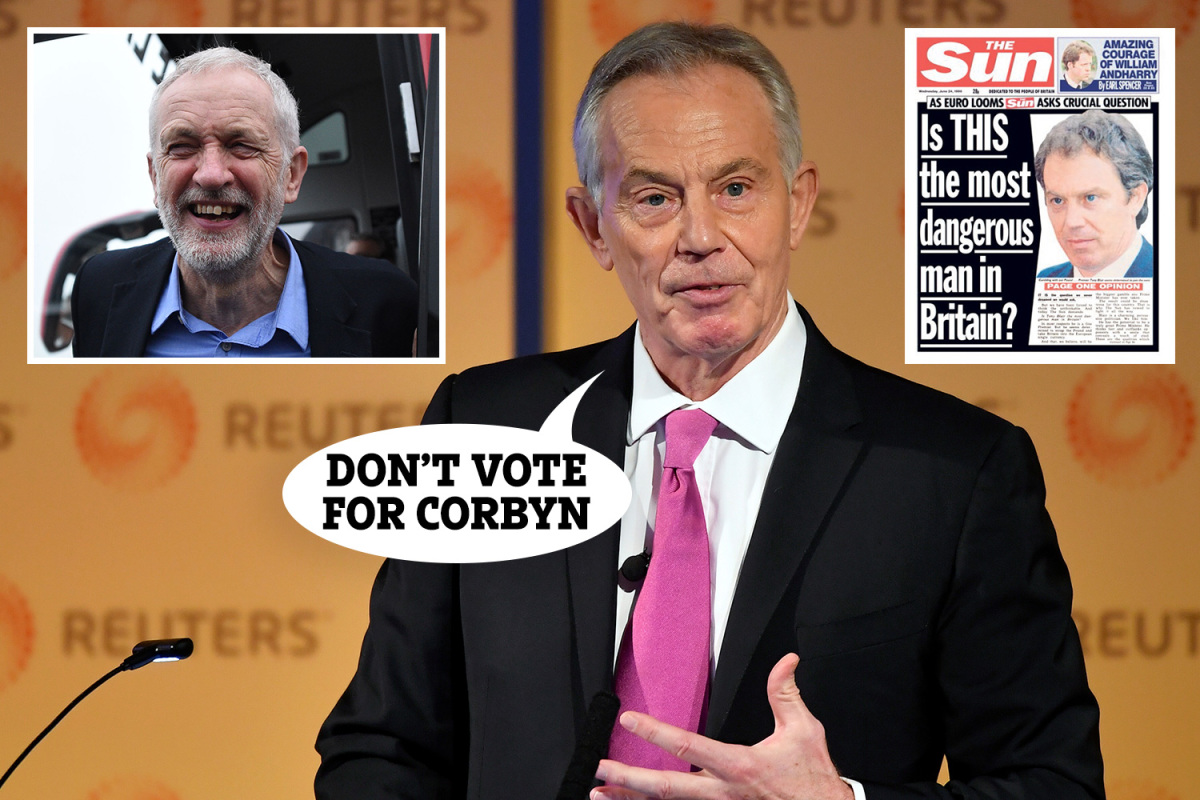 The former Labour PM — once hailed by The Sun as the most dangerous man in Britain — had an outbreak of common sense when he sensationally revealed he does not want the party to win the election.

Mr Blair said he would still vote Labour — but said others might want to switch to the Lib Dems or Tories.

And he refused to say if Mr Corbyn was fit to lead Britain.

He said: “My differences with Jeremy Corbyn have been pretty well documented and my views haven’t changed, let me put it like that.

“But I think if the polls are right there is a negligible chance of a Labour majority.”

Mr Blair also took a swipe at Mr Corbyn’s hard-left agenda, warning “the problem with revolutions is never how they begin but how they end”.

And he suggested he hopes no party gets a majority on December 12 and that Britain gets another hung parliament — an outcome that would mean yet more political deadlock.

Mr Blair — branded dangerous by The Sun in 1998 for his attempts to take us into the euro — is the latest in a string of high-profile figures to turn on Mr Corbyn’s leadership.

TV actress Maureen Lipman launched a blistering attack on the Labour boss, claiming he has an “ology in extremism”.

Former Labour MPs Ian Austin and John Woodcock have also urged Brits to back Boris Johnson, warning Mr Corbyn would be a national security risk if he became PM.

Senior Tory Nigel Evans said: “I’ve never, ever heard from a former Labour leader at election time telling people anything other than to vote Labour.

“When he was Prime Minister he would have been horrified that any former Labour leader would have suggested Labour voters do anything other than vote Labour.

“Yet here we are in 2019 and we’ve got a former ­Labour Prime Minister telling Labour voters to vote tactically.

“And a lot of them will be voting tactically to stop ­Corbyn, which he wants to do, but he hasn’t quite got the guts to say it.

“It’s great he’s finally had an outbreak of common sense but it would be great if he could go that extra mile, like a lot of other former ­Labour MPs have done, and tell people to vote Tory.”

Tory Party chairman James Cleverly added: “Tony Blair’s comments make clear that a vote for anyone other than the Conservatives is a vote for another deadlocked Parliament and more dither, division and delay, meaning we can’t move on and focus on people’s priorities.”

Mr Blair’s outburst came as a senior Labour adviser suggested the party could dump Mr Corbyn in order to get the backing of the Lib Dems and SNP for a minority ­government.

Lord Kerslake said the Lib Dems have pledged not to back a Corbyn-led government. And he said the SNP are demanding a second independence referendum.

He told Sky News: “All of that would form part of the conversation that Labour would be having with those two parties.”

Meanwhile, Mr Corbyn was last night accused of wanting to “rubbish Britain’s history” as he announced plans to force kids to be taught how evil the Empire was. Labour wants to overhaul the National Curriculum so children are given lessons in “historical injustice, colonialism and the role of the ­British Empire”.

Mr Corbyn will also vow to launch an independent review into far-right extremism — even though Labour is being formally investigated for anti-Semitism.

Launching his race and faith manifesto in London today, Mr Corbyn will claim “Labour is the party of equality and human rights”.

They will force firms to report on their ethnicity pay gap, end “rip-off charges” for passports and visas and launch a review into the lack of black and ethnic minority teachers. Labour will try to blame PM Mr Johnson and Brexit for a spike in hate crime.

But critics tore into Mr Corbyn for his plan, branding him a hypocrite for lecturing Brits on racism.

Tory Andrew Rosindell, who was chairman of the all-party parliamentary group on the Commonwealth, said: “Britain has a proud past. How typical of the Left to want to rubbish our history.”

Home Secretary Priti Patel said: “It’s staggering that Corbyn’s Labour see fit to lecture people about race and faith while they are investigated by the Equality and Human Rights Commission for the rampant anti-Semitism in their ranks.”

And Ian Austin, who quit Labour over anti-Semitism in the party, said Mr Corbyn should deal with that issue first.

He said: “No one is going to listen to a lecture about racism from Jeremy Corbyn when Labour is the only party in history to be subjected to a full inquiry by the EHRC.”