Adele has unveiled the tracklist for her fourth album, 30.

As well as lead single, “Easy on Me”, 30 is composed of 11 other tracks. The album will also see Adele’s first collaboration – with the late jazz pianist, Erroll Garner.

Fans on social media have already got themselves a favourite track just based on the song titles. “I Drink Wine” has had fans calling it “iconic”, “a banger” and “the most relatable song I’ve ever heard”.

30 will be Adele’s first album in six years since the release of the record-breaking 25, which has sold more than 20 million records.

Lead single, the piano ballad, “Easy on Me”, explored the singer’s emotions as she explained her and her husband’s divorce to their young son.

The tracklist also appears to hint that Adele will be further exploring her divorce from Simon Konecki.

Song titles such as “Cry Your Heart Out”, “Love is a Game” and “To Be Loved” suggest that the Grammy Award winner will be examining the end of her relationship with Konecki and how she dealt with it.

In support of the album, Adele will be appearing in a TV special with Oprah Winfrey that will feature a live performance and interview.

The “Hello” singer is also scheduled to play two concerts in Hyde Park next July.

30 is already the most pre-ordered album ever. It’s set to be released on 19 November via Columbia Records. 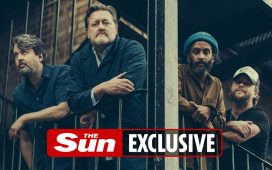