Addison Rae had an incredible vacation in the Turks And Caicos last week.

And on Monday the 21-year-old siren – who is one of the hottest new stars from 2021 as she lit up TikTok then landed the starring role in the film He’s All That – took to Instagram Stories to share some flashback images from the trip of a lifetime.

This comes just as the pal of Kourtney Kardashian talked style, saying she turns to the 1990s for fashion ideas and the woman she thinks pulled it together the best is Angelina Jolie. 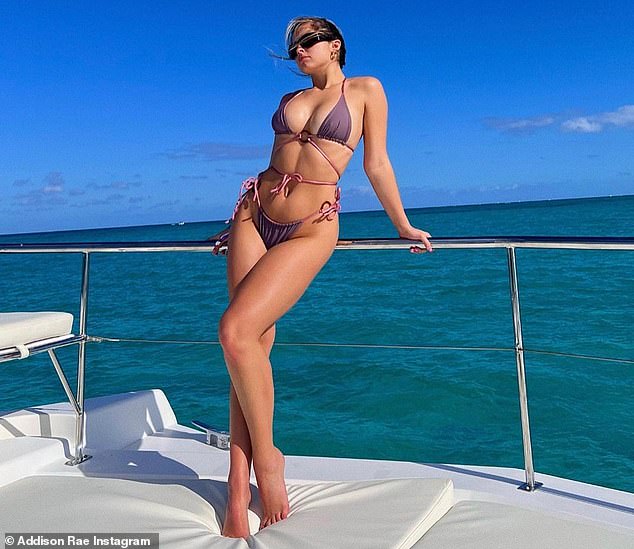 Bright future: Addison Rae was seen in the Turks And Caicos last week, with images showing the TikTok star in a purple bikini and Past Midnight earrings

Jolie, 46, came to fame in the late 90s with the movie Gia which was followed up by Girl, Interrupted, for which she won an Oscar.

‘My style changes very frequently because I’m still kind of figuring out what I love. It’s just a combination of things,’ said the social media favorite.

‘I love a ’90s … what is the word I’m looking for? Not grungy, but kind of that dark and sexy goth, Angelina Jolie, vibe. I think that’s really cool.’

And she named some other A list ladies who have given her ideas. 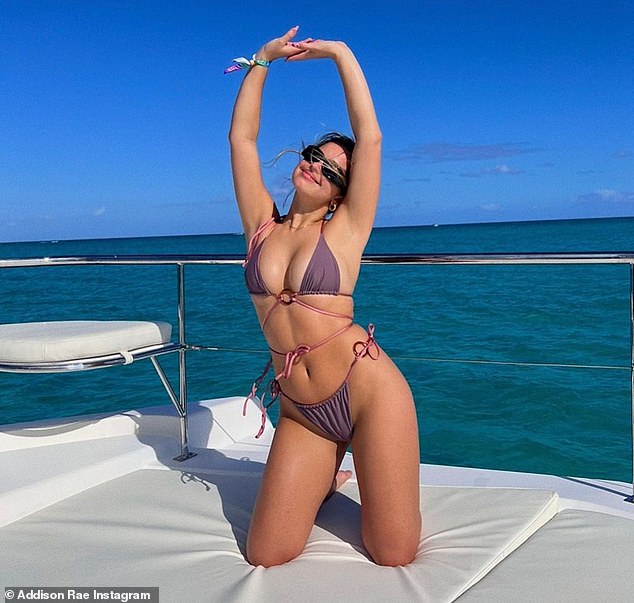 Trend setter: ‘My style changes very frequently because I’m still kind of figuring out what I love. It’s just a combination of things,’ she told Glamour.com this week

She told Glamour.com: ‘I love Liv Tyler, Kate Moss, Cindy Crawford as ’90s references. I think they all have really incredible looks.’

But she feels she has a long way to go.

‘I get so in my head sometimes about, oh, are people going to say that this doesn’t look good on me or whatever … But I’m learning to not care and to wear things that I like. We’re getting there with my style.’ 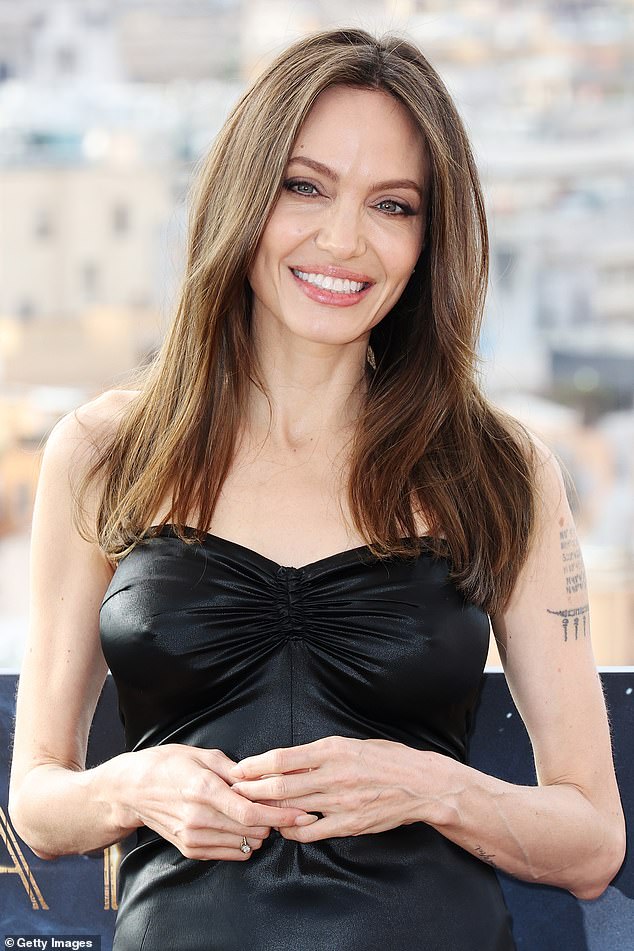 She looks up to this woman: She said that Angelina Jolie is one of the top stars she follows for style; seen in October in Rome 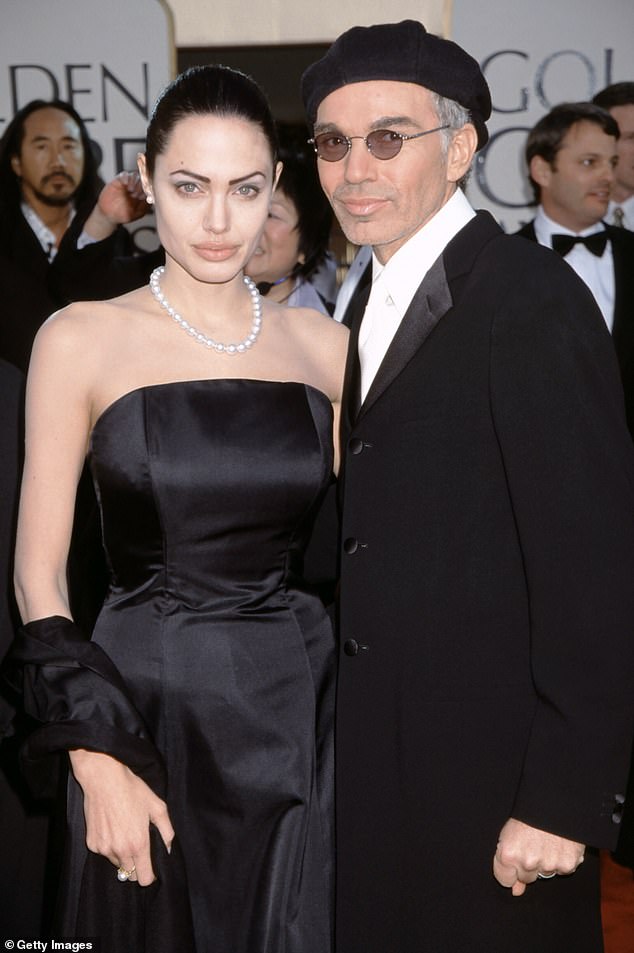 A slick look: Jolie seen in her ‘sexy goth’ look with husband Billy Bob Thornton at the Golden Globe Awards

Last year, Addison admitted she has an identity crisis ‘every other day.’

The actress finds it hard to ‘keep up’ with her own genuine interests because trends change so quickly.

‘Especially with the way that the trends go so fast nowadays, I don’t know if anyone else notices it, but trends are rolling, it’s like this is cool one day, then this is out and people think it’s weird the next day.

‘And I’m like, I just hopped on this trend. It’s so hard to keep up because it’s so fast.’

Last week she was seen basking in the sunshine in the Turks & Caicos. And she shared a series of snaps from her island getaway with boyfriend Omer Fedi.

The social media star, 21, showcased her flat midriff and her curvy form in a white bikini as well as a colorful beach cover up, accessorizing her look with gold hoop earrings from Past Midnight. 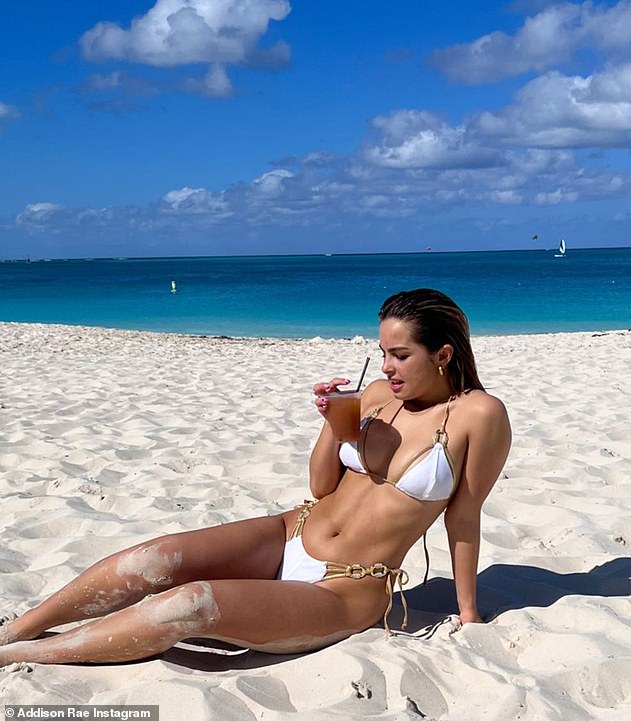 Sun kissed: She was basking in the sunshine in the Turks & Caicos 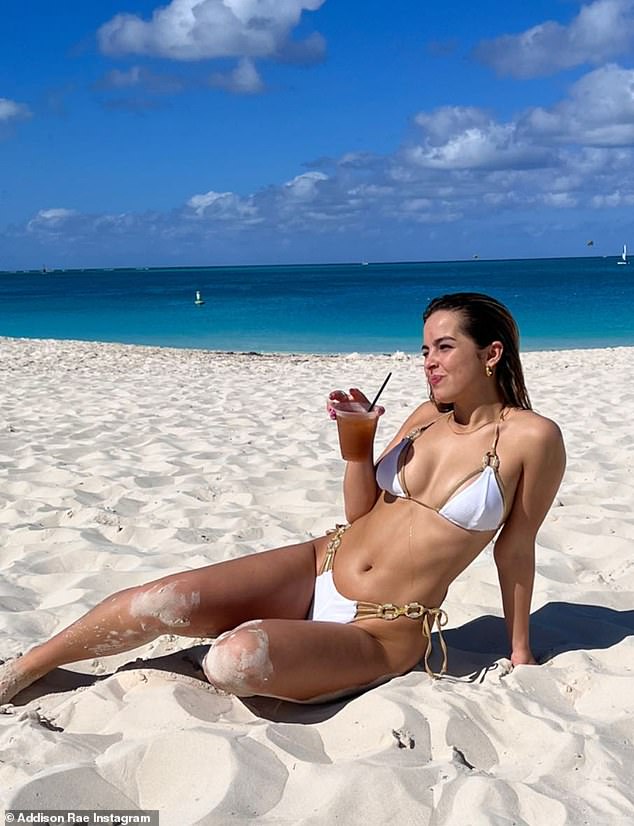 Looking incredible: She sipped on a beverage while showing off her stunning figure

She captioned the slideshow simply with: Turks & Caicos be like,’ kicking it off with a photo of herself in a pink, orange and white plunging beach cover up over a coordinating swimsuit.

Other images showed Addison in the blue waters as she enjoyed a peaceful swim.

The Tik Tok star showcased her toned frame in a mirror selfie as she rocked the white swimsuit with a lace shirt.

The lace shirt is The Sienna by the brand Susamusa, and retails for $96 USD.

She enjoyed a snorkeling session as well as a shopping trip to pick up some beaded jewelry, according to her snaps. 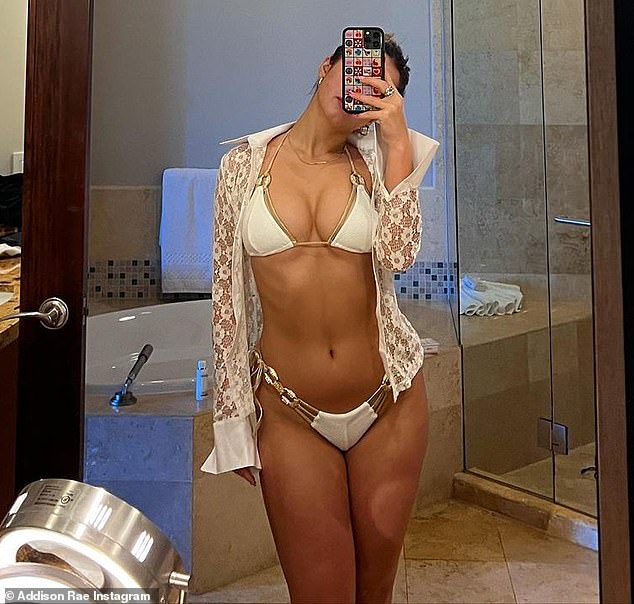 Wow: The Tik Tok star showcased her toned frame in a mirror selfie as she rocked the white swimsuit with a lace shirt; the lace shirt is The Sienna by the brand Susamusa

The brunette beauty donned a white halter one-piece during her trip as well while snapping a mirror selfie.

The stunner also snapped images of the frozen yogurt establishment she went too as well as a burger and fries she ordered.

Addison cuddled up to Omer on a boat for another Instagram post, as she captioned it ‘Air + Fire’ – referring to her zodiac sign Libra’s element of Air and his zodiac sign Aries’ element of Fire.

Addison and Omer, an Israeli guitarist, are currently there with pal Lil Nas X; she shared a snap of him onto her Instagram.

Addison and Omer have been dating since May 2021, after they were introduced by Kourtney Kardashian and her fiance Travis Barker.

Omer moved to Los Angeles from Israel with his dad when he was 16 and could barely speak English. Growing up, his dad was one of Israel’s most accomplished drummers. 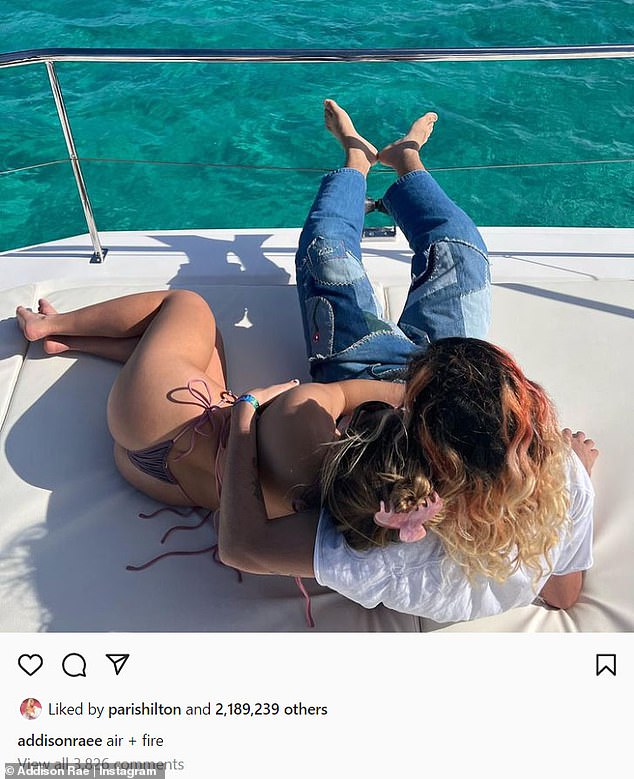 Cuddled up: Addison cuddled up to her beau Omer on a boat for another Instagram post, as she captioned it ‘Air + Fire’ – referring to her zodiac sign Libra’s element of Air and his zodiac sign Aries’ element of Fire

The 21-year-old boasts an impressive list of credentials with his most recent being a producing credit on The Kid Laroi and Justin Bieber’s chart topping song, Stay and Lil Nas X’s Montero album.

Their romance came only two short months after Addison ended her on and off relationship with TikTok star Bryce Hall.

The TikToker’s started dating in 2019 and officially called it quits in 2021.

In April, Addison put the Jack Harlow dating rumors to rest. After the two were spotted together at Triller Fight Club boxing match in Atlanta, she tweeted ‘I’m single.’

The young couple’s first public appearance together was at Machine Gun Kelly and Travis Barker’s rooftop concert in Venice this summer. 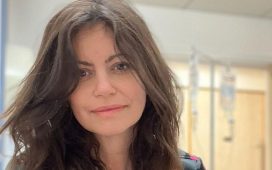