Adam Scott ended a near four-year title drought on the US PGA Tour with a two-shot victory at the Genesis Invitational at Los Angeles’ famed Riviera Country Club.

Scott began the final round of the event in a share of the lead and a Sunday 70 gave him an 11-under-par (273) total. The victory in Scott’s first PGA Tour of the season comes 1,442 days after his previous win on the lucrative circuit – the World Golf Championships event in Florida in March 2016.

Scott will climb to world No 6 for his first stint inside the top 10 since June, 2017. His 14th title on the PGA Tour puts him equal with Bruce Crampton with the third most wins by an Australian, behind Greg Norman (20) and Jim Ferrier (18).

That total does not include his 36-hole play-off victory at Riviera 15 years ago, a tournament that was shortened due to inclement weather.

“It’s amazing; I’ve loved this place [Riviera] from day one and it was tough out there today, but the crowd was incredible,” Scott said. “It is an incredible course with an incredible field; this win is special.”

He beat an elite invitational field of 120 that included nine of the world’s top 10 golfers. Scott also won in his last worldwide start at the Australian PGA Championship in December.

Scott got off to a hot start with two early birdies before a bogey at the par-3 fourth and a double-bogey at the par-4 fifth. He bounced back with a birdie on the par-3 sixth to regain a share of the lead and never gave it up, adding two more birdies with a bogey on his back nine.

Rory McIlroy, who started Sunday in the three-way share of the lead, made a disastrous triple-bogey on the fifth and never recovered – although a birdie on the 18th for a 73 left him in a five-way share for fifth at eight under.

Other challengers emerged, such as Harold Varner but he topped his tee shot on the short par-4 10th en route to a double-bogey and a 74 to slide down the field. Marc Leishman, the only other Australian to make the weekend, rounded out his week with a 74 to finish tied 43rd.

Tournament host Tiger Woods shot 77 and finished last among the 68 golfers to make the cut, 22 shots behind Scott. 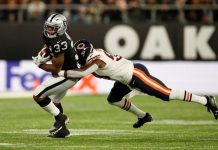 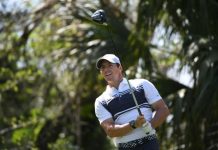