It’s been a rough six months for the videogames sector, and industry heavyweight Activision Blizzard (Nasdaq: ATVI) has had an especially gruelling time. But that makes it well worth a look. Videogame stocks were all the rage when Covid-19 lockdowns were at their peak. But Activision’s stock, after delivering annualised total returns of 21.4% for ten years, has slid by 21% since April.

Sentiment has deteriorated for several reasons. While investors cheered the videogames sector when everyone was stuck at home, they’ve jumped ship as vaccinations have been rolled out and life has started returning to normal. In the meantime, there have been concerns over China restricting game-playing for its children to three hours a week. Analysts also highlight the threat of future competition from established entertainment giants, such as Netflix, starting to stream games online to existing subscribers.

But Activision’s share price has fallen further than its peers’, owing to a California state lawsuit in late July alleging wide-ranging gender discrimination and serious sexual harassment in the workplace. The fallout was compounded by a staff walkout in protest against an initial response from the company, subsequently described as “tone deaf” by its own CEO, Bobby Kotick, according to The Wall Street Journal. These are serious allegations that the company is tackling with a revamp of internal processes and personnel changes at the top in order to bring about pervasive change in the company’s culture.

We know, too, that lockdowns weren’t going to last forever; it is no surprise that at some point people would leave their homes and not play videogames quite so much. In the same way, however, that investors overreact to good news, they overreact to bad news too. They’ve wiped out over half the share-price gains from the earliest Covid-19 lockdowns and slashed the valuation by a third on some measures. The noise from the news can be distracting, but look at the company itself and you’ll find it’s hardly the dud the market suggests. In fact, it’s now a bargain.

The company certainly has a great deal of work to do to restore its image, but quarterly results in August showed that it is in fundamentally good shape. In the three months to 30 June, it eclipsed analysts’ expectations on sales, raking in $1.9bn, and profits, which reached $0.91 a share. It also raised its earnings expectations for the whole  year to $3.76 a share, ahead of market forecasts.

Operating margins are climbing as a rise in online sales is gradually lowering overall costs; at 36% they are well above industry averages. The balance sheet is solid with net assets and cash at record levels: $16.3bn and $9.2bn respectively. There was little suggestion that the legal issue will significantly affect sales or the number of game players directly.

Looking ahead, 28 of the 36 bank analysts covering the company rate it either as “outperform” or “buy”. The consensus is the growth trend over recent years won’t be interrupted. On the contrary, annual sales and profits growth should average around 10% and 17% respectively until 2023.

Activision is a dominant, well-financed leader in a global, high-growth sector with strong brands and loyal customers. It is now valued for a lot less than it has been for years. If investors can stomach volatility caused by short-term difficulties and focus on the longer-term prospects, there’s every chance they’ll be well-rewarded.

A heavyweight with big potential 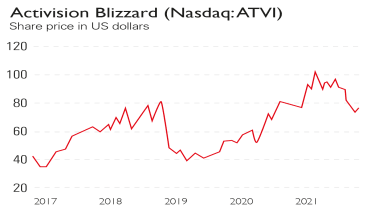 Activision Blizzard is a leading videogames business valued at $60bn. Its shares have risen by an annual 20% for 17 years. The group is one of the world’s biggest games firms.

It was formed in 2008 through a merger between Activision, a large developer of games played on consoles, and Blizzard, another publisher focused on computers.

In 2015 the King videogame business, which concentrates on mobile phones, was added. Activision Blizzard’s games are often billion-dollar franchises and have become household names.

Meanwhile, the trading outlook remains buoyant. Although the lockdown-induced peak in players has passed, the pandemic has attracted new audiences expected to stay. Videogaming is on the rise worldwide, with growth drivers such as increasing mobile-phone capabilities, for example, drawing audiences to more sophisticated offerings.

E-sports, in which Activision Blizzard has been a leading light, is also helping attract more players.

Tighter playing restrictions, such as the clampdown on gaming in China, is a bearish factor for the sector. Activision is largely unaffected by Beijing’s move – its China sales comprise just 5% of the total. On a positive note, recent court rulings suggest games publishers can avoid paying large fees to the likes of Apple and Google for sales made through their app stores, which is a big cost-saving. Analysts have been growing increasingly upbeat about the group and the consensus 12-month price target is $113, a near 50% premium to the current level.

Stephen Connolly writes on markets and finance, and has worked in investment banking and asset management for nearly 30 years (sc@plainmoney.co.uk) 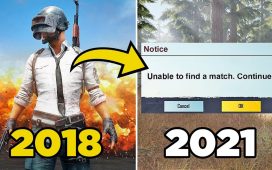