Jennifer Lawrence and her husband Cooke Maroney like to keep their relationship low-key, but that doesn’t mean they’re anything short of couple goals.

The Hunger Games actress, 31, and Cooke have been together since 2018 and recently confirmed that they are having a baby together.

Jennifer’s rep revealed that the star is pregnant with her first child to People, with the exciting news coming two years after she and Cooke tied the knot.

So, as the couple prepare themselves for their next chapter, here’s a look back at their relationship so far…

Jennifer and New York City art dealer Cooke were introduced by mutual friends in the spring of 2018. Romance quickly blossomed and the pair began dating, with sources revealing Jen was pretty smitten with her new beau.

She had split from director Darren Aronofsky the year before.

‘She is smiling like I have never seen her do with any of her previous boyfriends,’ a source revealed to People, adding that the pair had ‘great chemistry’.

Their romance was solidified by the pair jetting off overseas together and enjoying trips to Rome and Paris.

Soon, Jen and Cook were seen indulging in PDAs on the streets of NYC and speculation soon started mounting that the couple were engaged, after Jennifer was spotted with a huge ring on her finger.

Keeping coy, however, the couple – who kept their romance away from the public eye and off social media – didn’t address the rumours

Jennifer and Cooke’s engagement was finally confirmed in February 2019, although the pair never publicly commented on the milestone.

They then started to hunt for apartments together in New York, with Jennifer and Cooke throwing an engagement party in May.

Known for being notoriously private, Jennifer finally opened up about her relationship with Cooke for the first time in June 2019 during a podcast appearance on Naked with Catt Sadler.

‘He’s the greatest human being I’ve ever met. I wasn’t at a place where I was like, “I’m ready to get married,” I just met Cooke and I wanted to marry him,’ she gushed.

‘We wanted to marry each other, we wanted to commit fully. He’s my best friend, so I want to legally bind him to me forever.’

She said of Cooke: ‘How do I feel? Is he nice? Is he kind? It’s just… this is the one, I know that sounds really stupid but he’s just… he’s the greatest person I’ve ever met, so I feel very honoured to become a Maroney.’

Jennifer revealed to Entertainment Tonight that it had been ‘very, very easy’ to say yes when Cooke proposed.

Months later, Jennifer and Cooke made it down the aisle, with the pair tying the knot in a lavish ceremony held in Rhode Island.

A slew of A-listers were in attendance, with celebrity guests including Adele, Kris Jenner, Amy Schumer and Emma Stone.

After saying their vows, the newlyweds hosted a wedding reception at the swanky Belcourt of Newport – a stunning mansion designed by esteemed architect Richard Morris Hunt in 1894.

Dressed to impress for her bridal moment, Jennifer wore a wedding dress designed by Christian Dior on her big day.

Insiders claimed to People at the time: ‘It was an all-night party. Jen and Cooke were the last people to leave at 5.30am… she looked stunning in a jewelled dress.’

To round off their big day, Jennifer and Cooke later headed on their luxury honeymoon that saw them stay at a $12,700 ($9.9k) a night villa in Indonesia.

The duo headed to the luxury resort of Nihi Sumba where they kicked back at the exclusive Mandaka resort – comprising of just five luxury villas, which they have booked out for their stay.

The resort is set on 530 private acres and has private plunge pools and a host of activities for newlyweds to take part in, including horseback riding.

Following a series of rare public appearances from Jennifer and Cooke in New York throughout lockdown in 2020, fans were delighted to hear that the couple are now expecting their first baby together.

Again, neither Jennifer or Cooke have publicly commented on her pregnancy, but a rep for Jen confirmed she is expecting on her behalf.

We couldn’t be happier for the pair!


MORE : Emma Willis reveals biggest stress of parenting during pandemic: ‘We’ve had all sorts of thoughts’ 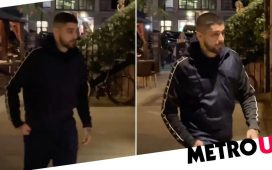