The prospect of having a camera inserted into the bowel to check for a range of conditions including cancer can make even the bravest of souls shudder.

Yet thousands of Britons must face this painful procedure, called a colonoscopy, every day.

But now patients are being offered a pain-free alternative which even allows them to return to work immediately.

During a colonoscopy, a flexible tube with a tiny camera attached is inserted into the back passage and moved up to the bowel. The procedure is used to diagnose a range of conditions from bowel cancer to coeliac disease and Crohn’s. 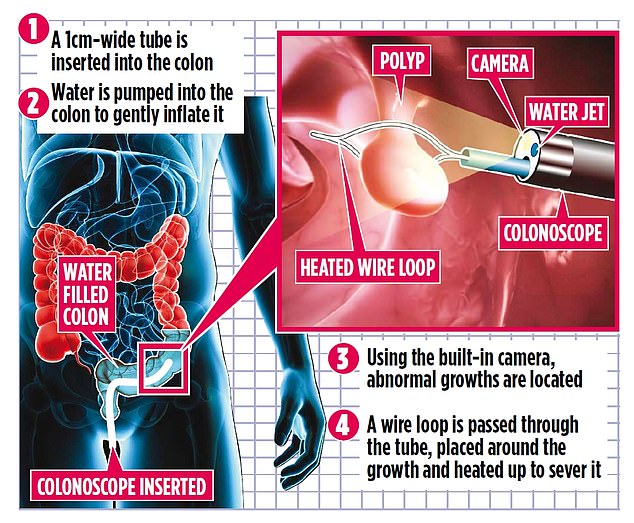 Under the new method, doctors fill the colon with lukewarm water, which expands it in a more controlled way and at a much gentler rate

Previously, doctors pumped 40 litres of air into the large bowel – also called the colon – to create space for the tube and to allow a better view of the area. But the air causes the colon to stretch outwards and double in length, which can be agonising.

Pockets of air can get trapped in folds of tissue, putting pressure on the abdomen. The procedure can also cause muscle spasms – and most people feel unsteady for at least 24 hours afterwards.

Under the new method, doctors fill the colon with lukewarm water, which expands it in a more controlled way and at a much gentler rate. Unlike air, which is hard to control and fills all parts of the colon, water widens the space only slightly, reducing the pressure.

The lukewarm water also relaxes the muscles, preventing spasms commonly experienced by patients. The so-called underwater colonoscopy is currently being used by NHS surgeons to detect and remove abnormal growths in the bowel known as polyps.

READ  Coronavirus: From home hygiene, to schools, food and friends, all the essential information you need

According to a study by the renowned Mayo Clinic in the United States, the odds of detecting these growths are 81 per cent higher when using water instead of air. In part this is because water cleans the surface of the colon and causes the mushroom-like growths to float, making them easier to find.

Professor Sauid Ishaq, a gastroenterologist at Russells Hall Hospital in Dudley, West Midlands, has carried out the water-aided procedure on more than 1,000 NHS patients over the past five years.

‘A lot of people feel anxious about having a colonoscopy and some patients experience severe pain,’ he says. ‘But with the underwater colonoscopy, they don’t usually need sedation and can jump out of bed almost immediately afterwards.’

Bowel polyps will affect about one in four people at some point in their lives and are most common in people over the age of 60.

Most polyps are harmless, but if untreated, some can become cancerous. Doctors believe many bowel cancers develop from a certain type of polyps called adenomas. As a result, it is recommended that all growths are removed to reduce the risk of the disease developing.

The night before an underwater colonoscopy, patients must take a laxative to clear their bowel.

In hospital, they lie on their side on an examination bed, so that the colonoscope can be inserted.

The tube contains a camera so that the doctor can navigate the bowel and check for polyps, as well as a water jet, which is controlled using a foot pump. 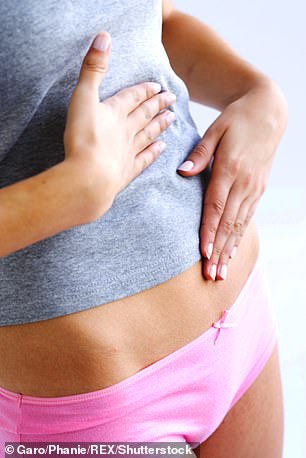 Thousands of Britons must face this painful procedure, called a colonoscopy, every day

During the procedure, which lasts about 40 minutes, a constant flow of water is pumped into the colon. This allows the scope to be moved painlessly along its length and means the doctor can check thoroughly for abnormal growths.

If a polyp is spotted, a wire loop is passed through the scope and out of the tip of the instrument.

The doctor hovers the tool over the growth – like a lasso – and squeezes the handle of the scope to tighten the loop around the polyp.

An electric current is passed through the wire to generate heat and sever the growth. The remains are then passed back down through the scope and sucked out or caught with a net.

The use of water helps them to float upwards, making them easier to find and remove.

‘It felt like my insides were going to explode,’ he said. ‘It was an intense pain which made me scream out.’

He has since had two underwater colonoscopies and says: ‘They were absolutely trouble-free, pain-free and comfortable – I had no issues at all.

‘With the first one I had to rest at home for several hours afterwards. But about 15 minutes after the second procedure, I felt like my usual self and went straight back to doing my jobs.’

Dudley Group Hospitals NHS Foundation Trust is believed to be one of the only places in the UK routinely offering the treatment.

READ  How to make your packed lunch healthier

‘It is a cutting-edge treatment, available at only a few centres worldwide,’ Prof Ishaq says. ‘But interest is growing rapidly.’