A Boris Brexit, election or all-out rebellion – what will happen next? 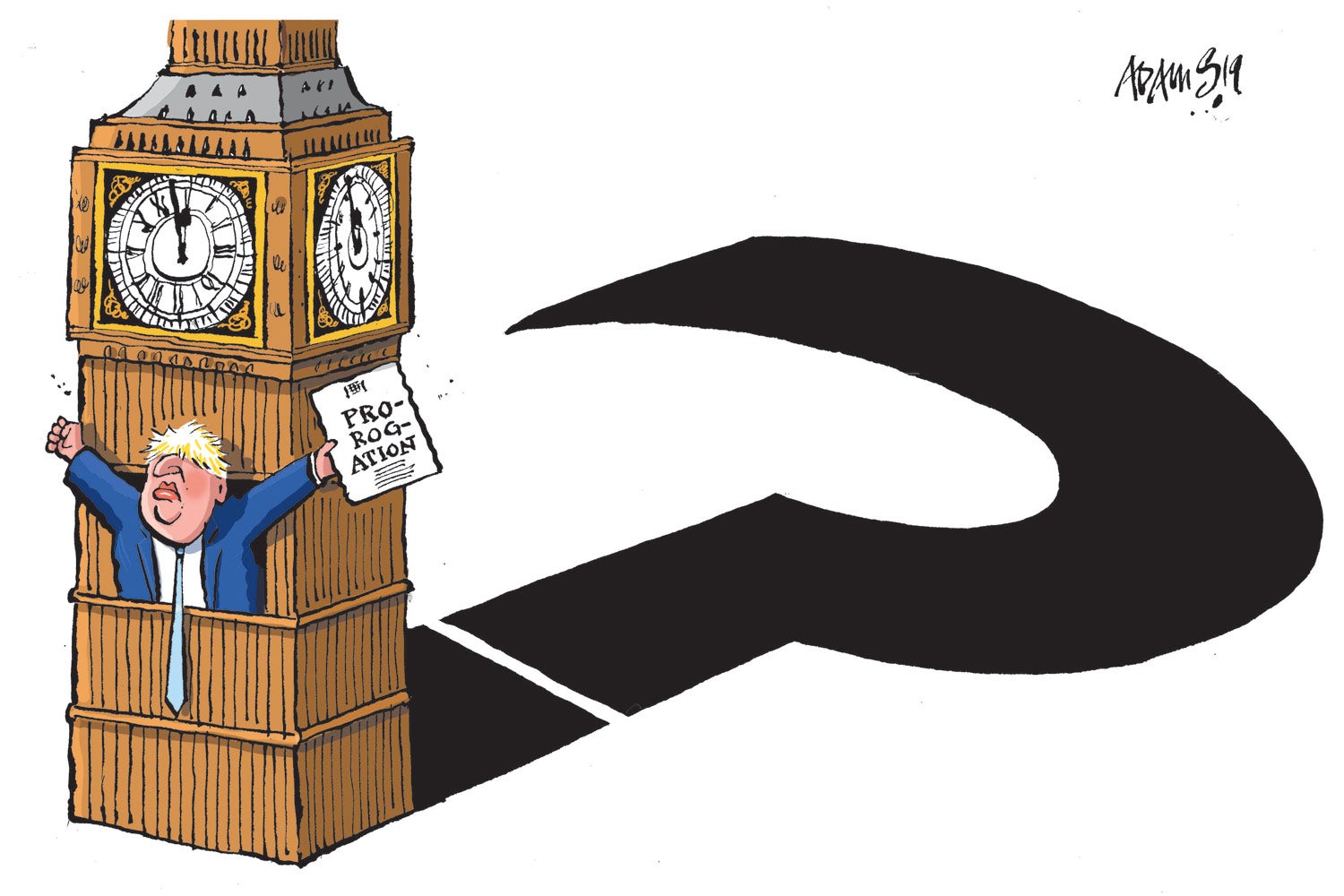 When the pilot of a plane announces suddenly over the intercom that “this is a completely normal procedure”, you know it’s time to check the safety card and hope the bloke in the row in front doesn’t block your way to the emergency exit slide when the lights go out and the smoke starts to roll down the aisle. So when Jacob Rees-Mogg (who is, you may like to forget, in the Cabinet as Leader of the House of Commons) reassured everybody that the suspension of Parliament for five weeks just after it has had a month-long break was just routine, no one was fooled.

If Brexit Britain was a Boeing, its engines would be stuttering, the oxygen masks dropping down and the ground approaching fast.

So are we about to crash out of the EU? Yes, if you talk to quite a lot of Conservative MPs. Some say they are outraged by the prorogation and will fight to stop a no-deal Brexit next week in Parliament with legislation — and they might well manage it. But we should pay attention to the quieter ones too — to the sort who don’t welcome Brexit but don’t think the Government has staged a coup either. Soon we will see which group comes out on top. Some have gone past the point of thinking that the combined efforts of anti-no-deal MPs can heave on the controls to get things soaring again. Gravity is gravity, they have decided and we are going down and might as well prepare. Glancing at Captain Johnson in the cockpit, one former minister who knows him well and isn’t a fan shrugs at what fate has to bring. “He’s won and we have to accept it,” he says.

Well, we all have to die sometime, but a lot of others think this isn’t the moment to do it. They think no-deal is a terrible idea, aren’t deterred by prorogation and are they are getting ready to pass a law in Parliament ruling it out.  By curtailing the time MPs will sit before the automatic exit deadline of October 31, the Government has made doing this harder in one way but easier in another: it’s focused minds on a common plan and forced the pace, too. Next week will be the moment they strike back.

There are a few things that we can be sure of in the rolling constitutional crisis of 2019. One of them is that MPs will be allowed back into the House of Commons next Tuesday — they are supposed to discuss the census, clean air and the implication for sheep farmers of leaving without a Brexit deal. Another — unless the courts rule otherwise — is that they will be kicked out of the Commons by September 12 at the latest — and perhaps three days earlier than that. They won’t be back until October 14 — by which time it might be too late to do much about no-deal but scream and brace.

It’s not that the four days which will be lost formally matter that much. It’s that by proroguing Parliament — the political equal of breaking open a fresh pack of cards — it has ruled out the chance of MPs voting to scrap the usual party conference break. As a result, MPs will stay away from work so that Jo Swinson can talk to the 13 other LibDem MPs in Bournemouth, even though all of them want to be in London blocking Brexit.

READ  Russian donor paid £135,000 to have dinner with Theresa May and cabinet members

So what might happen? The Government has momentum but it’s making mistakes too, which could prove decisive. One was suggesting that Remainer ex-ministers leaked the latest warnings about a no-deal catastrophe. That’s riled people like Philip Hammond who is now part of a powerful and growing rebel force of ex-ministers. Another is losing the much-admired Ruth Davidson, the Tory leader in Scotland, who’s announcing today that she’s standing down. That has made holding Scottish Tory seats a lot harder.

Another headache for the Government is that its opponents are joining forces. Jeremy Corbyn signed up to a plan this week with minority parties to fight no-deal rather than battle immediately for an election. Yes, time is tight, as the order for prorogation might allow just three and a bit days to do it. But numbers are numbers and if they can win they will.

Against that, a lot of Tory MPs will stick with Johnson as the only leader they have — what you might call the “I don’t care any more, I just want this over” kind of despair.

The line from the Government is that it aims to come back from a meeting of EU leaders on October 17-18 with an alternative to the backstop and win in the Commons. Or, if that doesn’t happen (and it’s not likely) then MPs have noticed that by resetting Parliament through prorogation the Government has also allowed, formally, a chance for another vote on the deal Theresa May had secured. Something, they think, might save them from no-deal.

On any crashing plane there must always be people who hope. Sometimes they turn out to be right. After all, a skilled Russian pilot landed his jet safely in a wheatfield the other day and everyone escaped. Could Captain Johnson do the same?

On board, expectations are about zero. Quiet resignation to fate is competing with outrage. The problem for those trying to stop no-deal is that some of those who they might hope would support them just can’t be bothered to be outraged any more. It’s gone on too long and they don’t think it will work. Some of those stuck in the middle also point out that anti-no-deal MPs have been talking about ripping up the Parliamentary rulebook. Can they really complain, they ask, when the Government does the same?

Well, the answer is yes. Parliament is supposed to be there to check the executive and over history it has often done it in new ways. Governments always hate it when their plans are foiled. That’s the point.

All of which leads to the only thing anyone actually does agree on, which is that there is going to be an election very soon. If it hasn’t been called in the next few days (and it probably won’t be), it could be set in progress in the hours before no deal, if things come to that. And what then? A leaderless Brexit, the jet set on autopilot, followed by a lot of speculation about how things will play out with the public.


The Government will make a simple pitch — that it was trying to get on with Brexit, against anti-democratic Remainers who wanted to frustrate it. Set out now, in the last hours of August, that sounds quite slick. But the next month will make two other things clear as well. One is that a lot of voters don’t want no-deal. The other is that no one, not even the Government, can know whether no-deal will be anything other than an immediate, perhaps life-changing, disaster. An election in those circumstances is anything but safe. A crash only happens when you finally hit the ground — and though the flight’s bumpy it’s still under way.