Just like horror movies the best horror games also gave fans some memorable and terrifying serial killers over the years. Some of these murderers were new creations, but fans were also able to meet their favorite serial killers again from popular movie franchises.

RELATED: Scariest Game Locations That Will Make You Sleep With The Lights On

Gamers love serial killer games because these often petrifying stories also come with great twists, fun world-building, and hard-to-solve mysteries that keep players engaged throughout the whole gameplay. However, players don’t necessarily have to play with a gore horror game to still get a great mystery and go after an iconic serial killer since non-horror games can be just as rousing as any bloody horror game.

Eddie is one of its most insane characters who is trying to kill Niko Bellic, the protagonist and player character of GTA 4. While this single-player action game is not the scariest serial killer game fans can play, but it’s one with a great story and gritty characters, set in one of the coolest city environments.

Watchdogs 2 is a dynamic open-world game that features several main and side missions. Players get to step into the shoes of Marcus Holloway, a talented hacker who wants to take down CTOS 2.0 by using his intelligence and the many cool and useful weapons of the game. It’s a third-person perspective game and is set in the beautiful city of San Francisco.

Its creepiest DLC-exclusive mission lets fans go after the infamous Zodiac Killer who just resurfaced after fifty long years. It’s not a particularly scary mission, but it’s a fun one with great details one of which is the fact that the Zodiac Killer actually looks like what real-life witnesses described to the police in the 60s.

L.A. Noire is a brilliant detective video game set in the 50s and has a gritty noir vibe. Thanks to its great cases, unique gameplay, and interesting characters it quickly became one of the most beloved fan-favorite games set in Los Angeles that make its players deeply invested in the story.

Players get to step into the shoes of detective Cole Phelps an ambitious member of the LA police department. One of the coolest things about the game is that many of its cases are inspired by real-life crimes and serial killers and the creepiest one of them all is the Black Dahlia murders. Players will have to solve the most infamous murders of the 50s and put Garret behind bars.

The Elder Scrolls V: Skyrim is one of the most critically acclaimed action role-playing video games with fantastic visuals, and interesting characters, set in a fascinating fantasy world. The player’s character is the Dragonborn who goes on a quest to kill the dragon who is prophesied to end the world.

RELATED: Horror Games That Are Scary Without Relying On Gore

This iconic game also has thrilling and dark quests and one of its bests is ‘Blood on the Ice’ thanks to its brutal serial killer and main antagonist The Butcher. This barbaric but powerful murderer has been killing and mutilating young women to harvest their body parts and no one else can stop him but the Dragonborn.

Clock Tower‘s terrifying Scissorman helped this vintage survival horror game become one of the most iconic games with serial killers. While the gameplay might feel slow for those who are accustomed to modern adventure games this classic still has a spooky scary Resident Evil-like vibe and requires players to use their detective skills to stay alive long enough and solve the mystery.

Clock Tower has nine multiple endings that are named alphabetically and fans can choose from five playable characters too. The story is set in the Clocktower mansion owned by Simon Barros who adopts four orphans. The story’s serial killer Scissorman will appear randomly and pop out of surprising places to attack and kill the player with its gigantic scissors.

Heavy Rain is one of the spookiest interactive decision-based thriller games with a scary serial killer called The Origami Killer. This ruthless child murderer drowns his victims by leaving them in drains during heavy rains.

This creepy but atmospheric game has four playable characters including a private detective, an FBI agent, a journalist, and a father whose son was just kidnaped by this merciless serial killer. Players will have to find and solve clues before Ethan’s son is found dead.

Deadly Premonition not only has one of the scariest serial killers, but it’s also one of the longest horror games on the market. It’s a cozy open-world survival horror game with a great story inspired by David Lynch’s Twin Peaks series.

Players can take on the role of a detective called Francis York, who has to investigate The Raincoat Killer in a fictional rural town called Greenvale. York will have to catch this now-iconic video game serial killer who believes that if he consumes the town’s special red seeds and kills four people, he’ll become immortal.

One of Dead by Daylight‘s most iconic killers from horror franchises has to be Ghost Face. This spooky multiplayer horror game is not just for horror movie fans but for anyone who loves a good scare.

One lucky player will take on the role of Ghost Face, the infamous serial killer while the four other players will be the survivors who have to avoid being tortured and killed. This competitive survival game has a great atmosphere and since it’s one of the few ones that lets gamers play the killer fans can finally become the killers from their favorite stories.

Do video games have a place in classrooms? | Daily Sabah – Daily Sabah 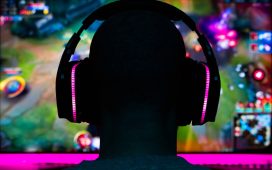