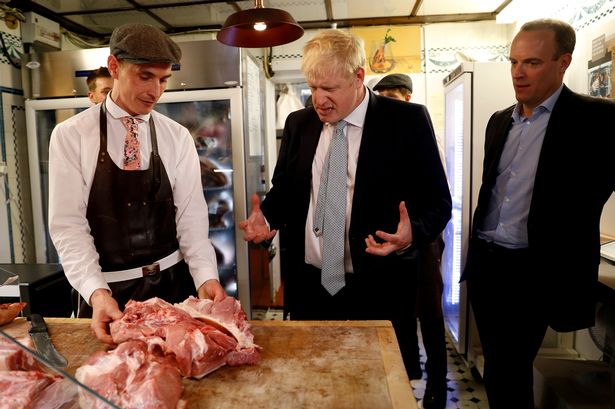 It’s the Queen’s Jubilee long weekend, and nobody in their right mind is thinking about politics.

Except, of course, the angry Tories who are plotting to unseat Boris Johnson after he was accused of lying over Partygate.

Pressure has been building all week with a drip-drip of letters from Tory MPs to the backbench 1922 Committee.

So of course, Mr Johnson has announced – or floated – a sudden flurry of so-called ‘red meat’ policies designed to please Tory backbenchers.

They were mostly spilt out before he and Carrie Johnson joined the Jubilee celebrations themselves, attending a special Trooping of the Colour.

There were also patriotic announcements this week of the next City of Culture in Bradford, and of course the Queen’s Jubilee Birthday Honours.

Here are seven ways the PM may have tried to distract his own party from questions over his leadership.

Since 2000 greengrocers and butchers have had to sell food using grams and kilos under EU law.

They can already label food in pounds and ounces too, as long as the font isn’t bigger than the metric sign.

But the government has announced a consultation on selling food in both metric and imperial – something they already announced in September but is being repeated for the Queen’s Platinum Jubilee.

Separately, the government issued new guidance allowing glassmakers to voluntarily stamp the Crown on pint glasses. The Crown was replaced in 2006 by the EU’s CE mark as a symbol of a genuine pint.

MPs say the move is a “distraction” from real issues and won’t make much difference anyway – because ministers had said both changes will be voluntary.

Minister Lord Parkinson was left embarrassed on Sky News after he failed two out of three questions about the units, including the number of ounces in a pound.

This is a vintage one!

The Telegraph popped up earlier in the week, reporting that Boris Johnson was open to lifting Labour ’s ban on new grammar schools in England.

Theresa May prompted an outcry in 2017 when she proposed a new wave of selective schools, only to drop her plans when she lost her majority in the election.

But he did’t sound so sure, either. He told journalists: “I don’t have an update here.” Surely it wasn’t briefed without a full plan being formed?

The Prime Minister ploughed ahead this week with his plan to slash civil servant numbers by a fifth – almost 100,000 people.

News was broken on Monday to departmental finance and HR directors in a letter from the Treasury and Cabinet Office.

They were told they had a month to assess three options – reducing headcount by 20%, 30% and 40% – before implementing them in the autumn.

Then on Tuesday Boris Johnson personally wrote to civil servants thanking them – and then explaining how the government needs “fewer” of them.

PCS union leader Mark Serwotka said: “Civil servants are already overworked and understaffed, so reducing the workforce by up to 40% is false economics.

“It’s shameful and is no way to treat the civil servants who worked so hard keeping the country going during the pandemic.”

A Brexit Freedoms Bill announced in the Queen’s Speech allows the government to sweep away swathes of EU law without consulting Parliament on all the detail.

It’ll allow ministers to “amend, repeal or replace the large amounts of retained EU law” without an Act of Parliament.

Instead there’ll be secondary legislation which can’t be amended and sometimes isn’t scrutinised by MPs before passing at all.

This week further details emerged of 1,500 laws that will get a five-year “expiry date”.

They include protections on chemicals, minimum alcohol requirements, planning and vacuum cleaners, according to the pro-Brexit Daily Express.

On Tuesday night the Home Office sent its first notifications to asylum seekers that they will be removed to Rwanda.

‘Removal directions’ were issued to an unknown number of migrants and refugees declaring the date of their forced departure.

The Home Office said the first flight was “expected” to leave on June 14 but it was unclear how many people would be on it, or what nationalities they will be.

Under the policy, migrants who arrived “illegally” on dinghies or fridge trucks since January 1 will be detained then forced onto charter flights, like those used to deport foreign criminals.

But ministers have previously admitted the number of people sent in the first year could be only in the hundreds, despite Boris Johnson touting the policy as a way to deal with “tens of thousands” of Channel crossings per year. It is uncapped so there is no limit.

The Home Office made a well-timed announcement on Monday about the UK’s post-Brexit ‘Aussie-style’ immigration system.

The two-year work visas are part of Boris Johnson’s dream of a high-wage, high-skilled economy but there are problems elsewhere.

Tory ministers mounted a climbdown over their own rules on Christmas Eve last year amid fears of a staffing disaster in care homes.

Foreign care workers were added to the ‘shortage occupation’ list after an outcry when they were barred from Britain under new minimum salary rules.

In an interview with Bloomberg, Boris Johnson said North Sea oil and gas should keep flowing to tackle the rising cost of living.

“I don’t think we can turn our backs entirely on hydrocarbons,” he said and praised the “flourishing sector” in the North Sea.

That is despite the COP26 summit in November – where Mr Johnson was a key figure – agreeing the “phase down” the use of coal power.

No10 said the PM was ready to fire up coal power stations this winter to avoid blackouts as the UK weans itself off Russian oil and gas.

All this is arguably sensible in the face of the Ukraine war, but also happens to please Tory MPs who’ve long said the green agenda is too damaging to the economy.

Queen’s Birthday Honours List 2022 in full: All the winners from celebs to everyday heroes