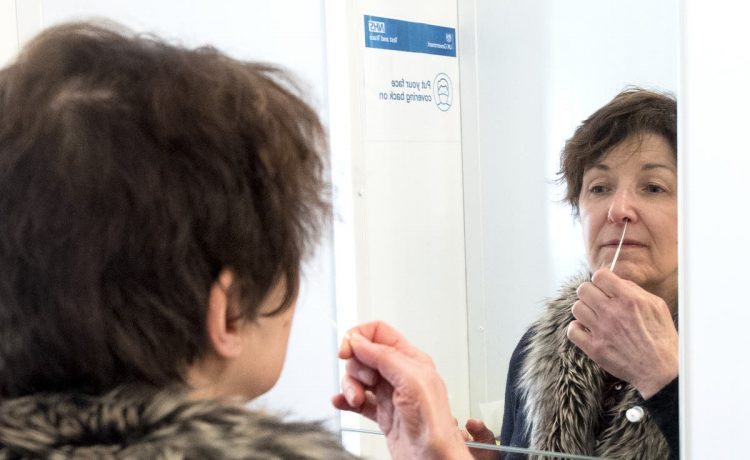 lmost 600 million quick-result tests might have gone unused after only 14% of those handed out were registered with Test and Trace, according to the public spending watchdog.

The National Audit Office (NAO) has found that, since mass testing was rolled out by NHS Test and Trace (NHS T&T) in October, just 96 million of the 691 million Covid-19 tests distributed in England have been registered.

Labour called the findings “damning” and said it was “astounding” that 595 million tests had gone unaccounted for.

Ministers had hoped the expansion of lateral flow tests, which can return results within 30 minutes, would help people to return to workplaces, with tests available to order online or pick up from local pharmacies.

According to the NAO’s ‘Test and Trace in England – progress update’ report published on Friday, Test and Trace bosses had forecasted that between March and May this year 655 million lateral-flow tests would be used in the UK.

While almost 700 million have been given out in England, the watchdog said “only a small proportion of the tests distributed have been registered as used”.

“NHS T&T does not know whether the tests that have not been registered have been used or not,” the progress report, which covers November 2020 to April 2021, said.

“It has started a programme of research to understand why the registration of test results is so low and is working to increase public awareness of the need to register results and improve its ability to track tests.”

Gareth Davies the head of the NAO, said the lack of registrations was a “pressing challenge” that needed addressing.

“Since we last reported in December, NHS Test and Trace has introduced a lot of changes, including mass testing, closer working with local authorities and initiatives to identify and contain variant forms of Covid-19,” the Comptroller and Auditor General said.

“However, some pressing challenges need to be tackled if it is to achieve its objectives and deliver value for taxpayers, including understanding how many lateral flow devices are actually being used and increasing public compliance with testing and self-isolation.”

“If lateral flow tests are going to play their part in helping society reopen, ministers need to make sure results are registered.

“The British people have sacrificed so much. The Government needs to step up.”

The spending watchdog also found that Test and Trace’s performance for returning the result of tests taken in the community within 24 hours “fell well below its target” during the winter spike in coronavirus cases in December.

Only 17% of people received their results within a day in December, a figure that had been scaled up to 90% by April.

In its 76-page report, the audit office also raised concerns about the proposals to transition Test and Trace to become the new UK Health Security Agency (UKHSA) by October.

It said there is a risk that the restructuring will “divert attention away from efforts to contain the spread of the virus” but the Department for Health said the change would help “face down potential future threats and viruses”.

The NAO found the Test and Trace programme – which until April was run by former Talk Talk boss Baroness Harding a candidate to become the next NHS chief executive – had an underspend of £8.7 billion, almost 40% of its overall budget. Its bill for 2020-21 came in at £13.5 billion.

The operation told the NAO that the underspend was because a predicted high level of demand for testing in January and February did not materialise due to the third national lockdown.

The delay in the rollout of mass testing to all households from January to March also contributed to the underspend, as did some commercial savings, the NAO was told.

The watchdog concluded that NHS T&T continues to “rely heavily on consultants” and has not reduced this as planned.

A total of 45% of staff at its central office were consultants at the mid-April mark, the national auditor reported.

On top of that, the average utilisation rate for its laboratories between November 2020 and April 2021 was only 45% – almost half the threshold deemed safe – while the amount awarded in terms of contract value more than doubled from £1.1 billion in April-June 2020 to £2.6 billion in January-March 2021.

Dr Billy Palmer, a senior fellow at Nuffield Trust, said: “Test and trace is now over a year old but is still falling seriously short of its performance targets despite the eye-watering cost to the taxpayer.

“The £14 billion price tag so far remains a concern. This report highlights expensive contracts and underused resources such as laboratories and contact tracers.

“More work is needed to ensure the potential benefits of this vast investment are future-proofed.”

A Department of Health and Social Care spokeswoman said: “NHS Test and Trace has played an essential role in combating this pandemic and the NAO has recognised many of the rapid improvements we have made in the short lifespan of this organisation.

“The testing and tracing being delivered across the country is saving lives every single day and helping us send this virus into retreat by breaking chains of transmission and spotting outbreaks wherever they exist.”