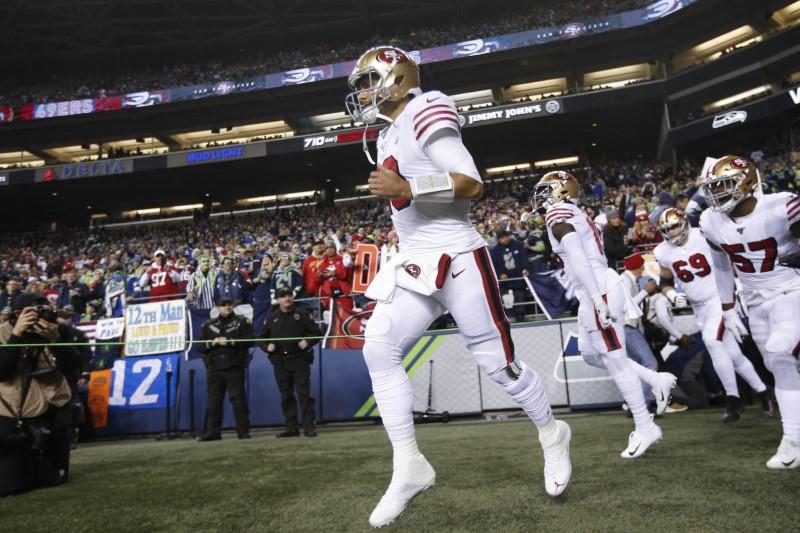 (Reuters) – The San Francisco 49ers, who one year ago posted a dismal 4-12 record, completed a stunning turnaround on Sunday, defeating the Seattle Seahawks to end the NFL season with the NFC’s top seed and a surge of momentum heading into the playoffs.

Despite the extraordinary about-face, the NFC West champion 49ers (13-3) said they have bigger goals in mind.

“The West Is Not Enough” read the t-shirts worn by the players after the thrilling 26-21 road victory over the division rival Seahawks, which earned San Francisco a first-round bye and home field advantage throughout the playoffs.

The 49ers defense, a key component in the team’s success this season but one that had looked vulnerable in recent weeks, stood tall to stop the Seahawks just inches from the goal line on Seattle’s final offensive play of the game.

The close finish was nothing new to the 49ers, who have seen their last five contests decided in the final seconds, experience that should serve them well when the pressure ramps up in next month’s playoffs.

“It’s just an incredible feeling. Appreciation is something that I feel,” said 49ers third year tight end George Kittle, who had 1,053 yards receiving this season including countless clutch plays in close games.

“The hard work we put in the last three years finally amounts to something that matters,” he told reporters on Sunday.

“We’re definitely not done… We get to play more football at Levi’s Stadium and I’m really excited to be able to play in front of our fans again.”

A key factor in the 49ers return to the playoffs for the first time since 2013 has been the return of quarterback Jimmy Garoppolo, who tore his ACL during week three last year and was sidelined for the remainder of that season.

Garoppolo has stayed healthy this season and has found an easy rhythm with receivers like Emmanuel Sanders, who joined the team via a mid-season trade, the speedy Deebo Samuel and the powerful Kittle.

The 28-year-old signal caller said it felt great to prove the doubters wrong by claiming the No. 1 seed in the NFC, but said his squad won’t be satisfied until they hoist the Lombardi Trophy.

“It’s pretty incredible. Especially just from the start of the season, all the hearsay and everything about our team and what we were going to do,” he said.

“And to come out here and get the No. 1 seed — it’s a pretty nice feeling.

“It’s a step in the right direction, but we’ve still got a long way to go.”

The 49ers will continue their quest for the franchise’s sixth championship in front of their home fans in Santa Clara on Jan. 11.