Four in 10 Americans would prefer to take on extra work than deal with a sick co-worker, according to new research.

A new survey of 2,000 Americans – in which the vast majority (1,930) were employed – found that 41 percent would rather cover for a co-worker than take the risk of getting sick.

But when they’re the ones feeling under the weather, employees aren’t so willing to stay home: When it comes to a bad cough, 69 percent feel it’s not a valid reason to stay home from work.

And one in three fear their boss wouldn’t consider it a valid reason to stay home from work either – but 52 percent will assume someone is sick if they start coughing.

Conducted by OnePoll in conjunction with Robitussin, the study found that 78 percent of employed respondents say they feel pressure to power through the workday when they’re feeling under the weather, ignoring common advice to take time to rest and recharge. 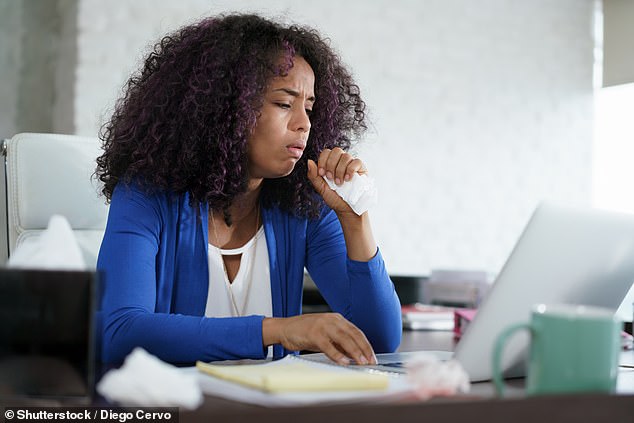 Nearly 80% of Americans say they don’t consider a bad cough a sufficient reason to call in sick from work – even though most assume others are sick if they’re coughing, a new poll found

There’s no throat clearing when it comes to US health officials’ advice: Centers for Disease Control and Prevention urges Americans to ‘stay home home you are sick.’

But many Americans ignore the experts’ recommendations.

Part of that is due to stress, as the survey revealed that 42 percent of employees surveyed derive stress from attempting to call out sick.

Sickness in the workplace is almost inevitable during the cough and cold season, causing concern among co-workers.

More than concern, choosing to power through could even hurt your standing with your fellow employees, as more than three-quarters (82 percent) said they’d be annoyed if someone showed up at the office with a cough.

When asked if a co-worker was visibly sick and coughing next to them, nearly half (48 percent) of respondents would tell their sick co-worker to go home.

Sleeping in on the weekend 31%

Showing up to work sick 46%

Canceling plans with friends or family due to illness 44%

Feeling a cough coming right before an important presentation 42%

Calling out of work sick 42%

And they’re self-preserving, too, 44 percent say they’ll immediately move away from someone who is coughing out of fear it’ll infect them, as well.

If respondents are the ones with a cough, it can be quite embarrassing, according to the survey.

Over half (52 percent) said coughing in a quiet place – whether it be a library or a movie theater – is a humiliating experience.

According to psychologist Dr Susan Bartell, being sick does take an emotional toll on sufferers, both in terms of work and personal responsibilities.

Coughing can cause sleepless nights, making it harder to function through a workday, while days spent out of commission can leave Americans feeling behind on things like housework, bills and other burdens.

With that said, it’s no surprise that Americans want to avoid the common cold as best they can.

In fact, they’d go to incredible lengths just to guarantee they would have just one year without sickness.

For example, over one-third (37 percent) of those surveyed would even give up their vacation time for a year to be cough- or cold-free.

Sleeping in on weekends and watching favorite TV shows also made the list of sacrifices if it meant a whole year without sickness.